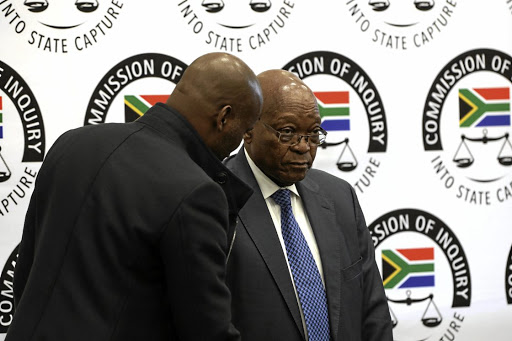 Former president Jacob Zuma couldn't recall some of the events he was asked about as his memory seemed to fail him during his second day on the stand at the state capture commission of inquiry.

Zuma could not "recollect" seeing former ANC MP Vytjie Mentor at the Gupta Saxonwold compound in 2010.

He also could not recall walking Mentor, who was on crutches, to the car ]that took her back to the airport.

The former president also could not remember the Guptas being present in any official state visit, including a trip to China where the Guptas were allegedly present in 2010.

Zuma's defence, especially advocate Thabani Masuku, jumped to the former president's defence on several occasions as they felt he was "unfairly" cross-examined.

After the lunch break, Zuma's memory had still not recovered as he also could not recollect calling the late former minister in the presidency, Collins Chabane, allegedly instructing him to fire then government spokesperson Themba Maseko in 2011.

Asked whether he knows why, as per Maseko's testimony, Ajay Gupta would say he would speak to his seniors if he didn't cooperate, Zuma said: "No, I don't know".

Commission chairperson Raymond Zondo stepped in several times to remind Zuma that the commission needed to arrive at a conclusion on the evidence that had implicated him. Zondo politely went back to some of the questions that Zuma had claimed he could not recall.

Zuma also did not recall making a call he is said to have made to Maseko in 2011, urging him to assist the Gupta-owned New Age newspaper.

However, Zuma could still clearly recall conversations he had with the Guptas about the establishment of the publication, which benefitted richly from government advertising while he was president.

"From time to time they briefed me. They [were] just briefing me on the progress they were making, not the financing," Zuma said.

Mentor testified last year that she visited the Gupta Saxonwold compound in Johannesburg where they allegedly offered her a cabinet position. She got angry when the offer was put to her and Zuma walked into the room and allegedly calmed her down, she testified. Mentor told the commission that the former president walked her to the car that took her back to the airport.

Zuma released a statement after the evidence was presented before the commission saying he had no recollection of Mentor at all. In hindsight, he said yesterday, he did know Mentor but could not attach the name to the face.

The former president's memory seemed much sharper on the first day on the stand, as he recalled specific details on some of the things that happened almost three decades ago. He had told the commission how he remembered a plot to end his political career more than 25 years ago, which he claimed was still pursued while he served in government.

Maseko was fired, he told the commission, after refusing to co-operate with Ajay Gupta, who wanted to discuss redirecting government advertising funds towards their newspaper. He claimed that Ajay told him that he would get his seniors to deal with him for his refusal.

While Zuma confirmed that the Gupta family were his friends, he denied that they had any influence on some of the decision he made in government.

He told the commission that he had no idea as to how Ajay was able to speak about a looming cabinet reshuffle in the conversation he had with Mentor at Saxonwold.