The Gupta brothers had nothing to do with deciding appointments to government.

This is according to former president Jacob Zuma, who at the state capture inquiry on Tuesday denied that any member of the Gupta family had knowledge of who would be appointed or fired from his cabinet during his tenure as the head of state.

Zuma was responding to allegations made to the commission by former ANC MP Vytjie Mentor, who last year claimed that she was taken to the Gupta family's Saxonwold home in 2010 under the assumption that she would be meeting Zuma.

She claimed that while she was at the house, Ajay Gupta offered her the public enterprises ministerial position in exchange for doing the family's bidding once she entered cabinet.

She said that when she became agitated Zuma appeared from the next room and ushered her out of the house.

Image: SANDILE NDLOVU Former president Jacob Zuma is testifying at the judicial commission of inquiry into allegations of state capture. 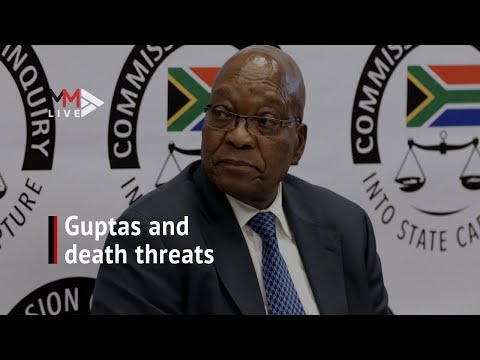 "I consult very selected people. At no stage could I do a reshuffle without people knowing who were supposed to know. For example, the top six of the ANC would have to know what I am doing, as well as the alliance."

Asked if his relationship with the Guptas warranted Ajay to suggest who should be appointed to cabinet, Zuma said: "No, not at all. He had nothing to do with what happens in government."

Zuma denied that he had been at the Gupta residence when Mentor was present.

Mentor was quick to take to social media while Zuma was testifying, saying on Facebook that the former president now recalls who she is. This was in response to a 2016 media statement in which the presidency said Zuma had no recollection of who Mentor was.

"Zuma now recalls who I am. He even says he knows me. But he has flatly denied recalling anything that has been put to him regarding my evidence," she wrote.

Zuma said he never instructed then minister in the presidency Collins Chabane to have Maseko removed.

Chabane died in a car accident in March 2015.

Maseko previously told the commission that he was driving to the North West in November 2010 when he received a call from Gupta, demanding that he meet managers at the New Age newspaper the next day to discuss the redirecting of government advertising spend to the family's media asset.

“At this point he (Ajay Gupta) told me that I was being unco-operative and that he was going to speak to my senior in government, who would sort me out and replace me with people who would co-operate with him,” Maseko recalled.

Zuma claimed the Gupta brothers never discussed the financials of their media interests with him.

"I never instructed the minister to do so (remove or transfer Maseko). I discussed the fact that he would like to transfer Maseko. I think there was an issue between the two of them, I can’t remember the details," he said.

Image: SANDILE NDLOVU Former president Jacob Zuma shares a light moment with evidence leader Paul Pretorius during a tea break at the state capture inquiry where he continues to give testimony on Tuesday.

Zuma's legal representatives jumped in soon afterwards, claiming that Pretorius' line of questioning was more like a cross-examination than an inquisitorial process.

This resulted in deputy chief justice Raymond Zondo having to call the counsels for Zuma and for the commission into his chambers to discuss a way forward.

When the commission resumed, Zondo said: "The discussion that I had has resulted in an agreement that I do not need to make any ruling on the concerns or objections that had been raised. A way has been found to try to minimise any prospects of any feeling of unfairness ... It's been agreed that I will try to be more ready to intervene in case I think there is unfairness in any question."

Maseko earlier told the state capture commission that Chabane had told him that Zuma had given the instruction that he should be booted.

According to Maseko, Chabane said he had received a call from Zuma, who was out of the country at the time, instructing him to remove Maseko.

On Tuesday, Zuma said people often used his name if they wanted "bad" things to be done, and Chabane could have done the same if he wanted to get rid of Maseko.

The ANC must investigate the spy allegations against some of its senior leaders which have surfaced in the evidence presented by former president Jacob Zuma.

This is the view of former co-operative governance and traditional affairs minister Des van Rooyen as he reflected on Zuma's evidence given on Monday.

Van Rooyen on Tuesday morning said he was shocked at some of the names that were mentioned by Zuma as having worked with the apartheid government as spies within the ANC.

"These are very sensitive revelations. Many people lost their lives. Those that we led lost their lives because of informers. To have such people being labelled informers is a very serious allegation. These people were given responsibilities in government and in the ANC," Van Rooyen said.

"Personally I think the ANC must treat this matter seriously. The ANC must set up a platform to probe all these allegations urgently. If these allegations are true, we can't continue having comrades who worked as informers among ourselves being at a driving seat of our national democratic revolution."

Van Rooyen's reaction follows Zuma's testimony at the state capture commission where he said that former public service and administration minister Ngoako Ramatlhodi was a spy. Ramatlhodi has rejected this and offered to undertake a lie-detector test in public to refute the claims.

Former president Jacob Zuma says his life was threatened after he appeared before the state capture inquiry for the first time on Monday.

Before proceedings started on Tuesday, Zuma informed deputy chief justice Raymond Zondo that his personal assistant had received a call on Monday night.

"Yesterday night between 7pm and 8pm, my PA from the ANC side was phoned by a person she does not know. 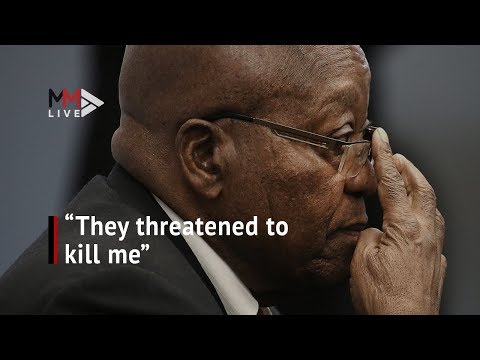 "This person said she must tell Zuma that we are going to kill him and his children and some people around him. She informed me this morning," Zuma said.

He claimed that his legal representative, advocate Muzi Sikhakhane, also received threats on his life recently.

"... Also, my senior counsel, Sikhakhane, this follows threats that have been made to him, very serious ones as well. A short while ago, about a week ago, we received that," Zuma said.

On his arrival at the judicial commission of inquiry on Tuesday, his supporters inside the venue were slightly more subdued compared to day one, but still clapped for him as he walked in.

His son Duduzane accompanied him to the hearing.

Former President Zuma arrives at #StateCapetureInquiry for Day 2 of his evidence.
His supporters slightly more subdued today, but still clapping for him. We start now. pic.twitter.com/3wGRm9fTo7

ANC secretary-general Ace Magashule "partly knows" what former president Jacob Zuma is talking about when he accused the state capture commission of targeting him.

Zuma, who is taking the stand for the second day on Tuesday, told the commission on Monday that he believed the inquiry was set up as part of a long-term strategy to assassinate his character. He mentioned a long history, spanning 20 years, which he said further showed that there has always been a target on his back.

Speaking on the sidelines of the commission on Tuesday morning, Magashule - who arrived with an ANC entourage including MK Military Veterans Association spokesperson Carl Niehaus and ANC spokesperson Dakota Legoete - said that he shared the same sentiments as Zuma.

"I partly know what he's talking about," said Magashule. "You are media, you are analysts, you must analyse. Some people you believe, you don't believe others. So just be objective and that's what we all call for."

He said he had set aside today to listen to Zuma's evidence.

"Like everybody I'm here. It's a commission, yes. I'm here to hear what the former president says and indeed I do support him as a leader of the ANC.

On Monday, the ruling party said Zuma had briefed Magashule about his appearance before the judicial comission of inquiry into state capture ahead of time.

In a statement issued during the first day of Zuma's appearance before the inquiry on Monday, the party said Zuma visited Luthuli House on Friday to formally brief Magashule and the organisation viewed his visit as courteous and exemplary. It did not get into the details of the meeting.

The ANC has also appealed to South Africans who have information that can help the commission to avail themselves and present relevant information to the inquiry.

"The ANC has consistently called on its members and leaders to co-operate fully with the commision and to assist it in its work. The commission was set up at the insistence of our organisation and other South Africans who are committed to ethical conduct in both the public and private spheres," it said.

Zuma is facing questions at the judicial inquiry relating to allegations he colluded with the Gupta network to enable the looting of the public purse.

He has been implicated by several high-ranking politicians and officials of influencing the appointment of cronies to state-owned entities, offering ministerial posts to people who would favour the Guptas, and of wanting to irregularly press ahead with a R1-trillion nuclear deal despite concerns it could bankrupt the country.

Zuma ended his first day at the commission on Monday by denying that he arranged a 2010 meeting with Maseko and members of the Gupta family to discuss the redirection of government advertising spend to the family's media assets.

Zuma could not seem to recall the contents of a phone call, or that he had even made one, to Maseko ahead of his meeting with Ajay Gupta.

In the call, Zuma is said to have instructed him to "help" the Guptas.

In the meeting which followed, Ajay Gupta is said to have instructed Maseko to direct GCIS's entire R600m media advertising budget into the family's media interests - which he refused to do.

"I don't remember because I normally called the directors-general, particularly this one, to discuss a number of issues. I can't remember making this call. It is natural that they [the Guptas] would want to talk to him. I don't think there was anything out of the ordinary," Zuma said.

"If such a call is made, would that call have moved away from the normal procedures? Would trying to compel the DG be a wrong thing? I had nothing to do with this discussion with Maseko ... I'm sure Gupta can explain better."

Once the commission has completed quizzing Zuma on Maseko's evidence, it will then move on to allegations set against Zuma by other witnesses who have previously appeared before it.

Zuma's second appearance on Tuesday was a lot quieter, with little to no public supporters outside the venue. By the time the commission started its day, the police outside had little to do as the crowd attending on Monday was nowhere to be seen.

On Monday, people had come from different structures of the ANC including the Radical Economic Transformation Champions, party branches from Gauteng, Limpopo, KwaZulu-Natal as well as student movement Cosas. The latter raised eyebrows as it had, among them, pupils in school uniform to show their support.

Mahumapelo on Monday told a roaring crowd gathered at a nearby park that the "nine wasted Zuma years" [President Cyril Ramaphosa characterisation of Zuma's presidency] was a false narrative and sought to tarnish the former president's legacy. 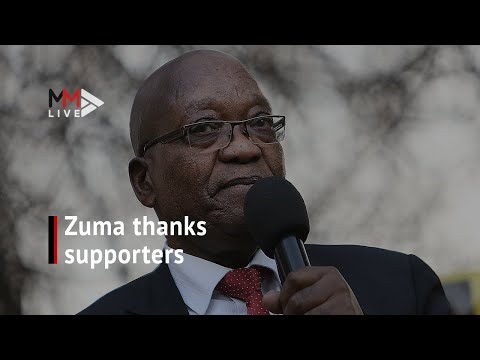