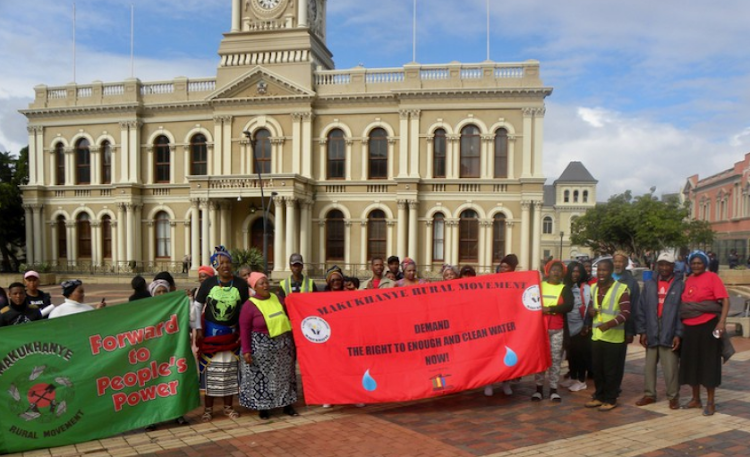 A group of farm dwellers and workers protested in Port Elizabeth on Friday, demanding an end to farm evictions and other abuses against them. The protesters said government must speed up rural development and agrarian transformation.

Led by Makukhanye Rural Social Movement, Inyanda National Land Movement and Rural Women’s Assembly, they marched from Cuyler Street to Vuyisile Mini Square. A petition was handed to officials of the department of rural development and land reform.

“We are also demanding urgent action and investigation into violations of farm worker rights, specifically in the localities of Langboss, Westbank and Thornhill,” said Phumla Runeli, chairperson of the Makukhanye Women’s Forum.

“From poor infrastructure to poor service delivery and a failing land reform policy, the black poor majority living and working on farms are feeling the rot of this system,” she said.

She said many women were denied maternity leave and their salaries were very low compared to male workers.

Sociologist Goran Therborn has probably influenced the study of inequality more than any other scholar in recent years.
News
2 years ago

Runeli said children were not allowed to stay with their parents on farms during school holidays. Some farmers have desecrated the graves of workers and will not allow relatives to visit the graves, she said.

“Our members conduct farm visits and receive reports from particularly women who live and work on farms about their conditions and struggles,” Runeli explained.

Sizeka Moni, also of Makukhanye, said: “In Langboss, residents are without electricity … In West Bank farm workers are not even given protective clothing, while there was no proper ablution facilities at Parkers Kamp, Thornhill.”

The organisations also want women living on farms to be allowed to keep and raise livestock and women working as domestic workers on farms to be paid at least the minimum wage, together with other benefits.

The petition demanded an end to farm evictions and the cutting off of the electricity supply to farm workers’ homes.

Young farmer planting one seed at a time

The petition also stressed the need for fairness and openness in monitoring remuneration in farm equity schemes and greater financial disclosure to farm beneficiaries.

Among the protesters were Zwelonthando Moni and his wife Sizeka, who were born on a safari farm outside Uitenhage. They said they are part of a share equity scheme, but Sizeka said: “It is very painful that for the past 13 years we haven’t got any benefits yet there are many trophy hunts happening at the farm.”

The protesters want satellite offices to be established by the department.

Nomfundo Mbewana of the department of rural development and land reform requested a month to respond to the petition. “Some of the issues you are demanding need the department of labour and the local municipalities so we will have to engage with them,” she said.

“We will be issuing a toll free number that people should call when being evicted,” said Mbewana.

A farmer has opened a counter-complaint after a video of him allegedly assaulting two people on his farm in the North West went viral.
News
2 years ago