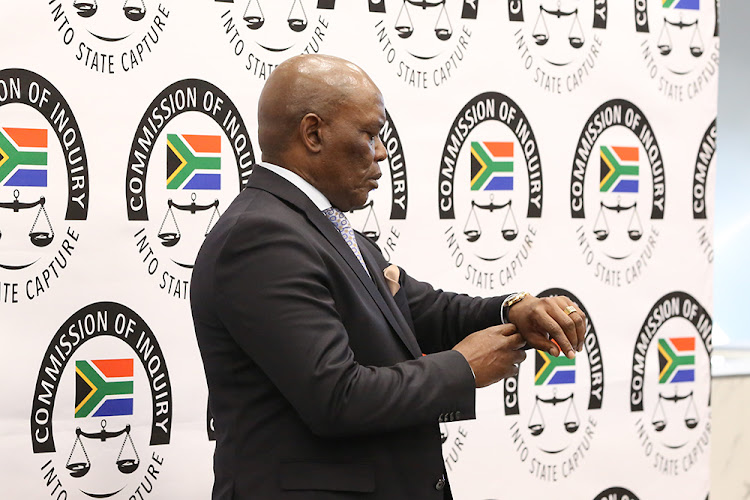 It appears the man who finally approved the clearance of the Guptas' Waterkloof flight may have done so to land a government job.

The man was seemingly trying to gain favour with former chief of state protocol Bruce Koloane to get a job at the department of international relations and cooperation (Dirco).

Waterkloof command centre flight post officer Thabo Ntshisi was called back to the state capture inquiry on Thursday‚ after his initial testimony last week‚ to comment on cellphone recordings between himself and another person‚ in which they discuss a job opportunity at Dirco.

Ntshisi previously described to the commission his interactions with Koloane‚ who‚ he said‚ called him and instructed that he approve the landing of a Jet Airways flight at the Waterkloof Air Force Base on April 30 2013. The flight was carrying wedding guests attending the Gupta family's lavish Sun City wedding.

In the cellphone recordings‚ obtained through an investigation after the landing took place‚ Ntshisi is heard speaking to a woman named "Sarah" soon after Koloane issued the instruction.

Ntshisi said he had previously spoken to Sarah‚ who knew someone close to Koloane at Dirco‚ to arrange a job for him at the department.

International Relations and Cooperation Minister Naledi Pandor will approach President Cyril Ramaphosa to discuss steps to be taken against Bruce ...
News
2 years ago

“Because I'm working with clearances so there is a favour I am doing for him right now ... of an Indian aircraft that is coming on the 29th‚" Ntshisi is heard saying in the recordings.

But Ntshisi denied that he approved the landing to gain favour with Koloane.

"If you remember correctly in our discussion [with Sarah]‚ I also involved the name of Koloane. When Sarah was going to speak to that particular person‚ she would then tell that person where Thabo Ntshisi is employed‚ which was going to be very simple for Koloane to remember when the name Thabo Ntshisi comes up‚" he said through an interpreter.

"I have already stated that when we started talks between myself and Sarah‚ the message was merely asking if she spoke to the person we are referring to. What you can say was luck or bad luck was that I got involved in this Indian flight. It was going to be easy for Koloane to remember who Thabo Ntshisi is."

Asked if he he saw his role in approving the flight as a means to gain favour with Koloane for the job‚ he said: "That is not so."

"In our discussion there was this word‚ 'favour'‚ but I did not actually specifically say that I did a favour for this specific person ... I never mentioned any person's name when I was talking about doing someone a favour‚" he said.

"When I was speaking to Sarah and asking her to speak with that person on my behalf‚ that specific person when he or she was going to speak with Koloane mentioning the name Thabo Ntshisi‚ Mr Koloane would simply remember who that person is.

Koloane was suspended for his role in the landing and was granted a position as South Africa's ambassador to the Netherlands by former president Jacob Zuma soon afterwards.

The commission's hearings will continue on Friday.

State capture-implicated former head of state protocol Bruce Koloane has admitted that he neglected normal administrative processes to allow the ...
News
2 years ago

Former head of state protocol Bruce Koloane has denied any wrongdoing in the landing of a privately chartered airplane by the Gupta family at ...
News
2 years ago
Next Article