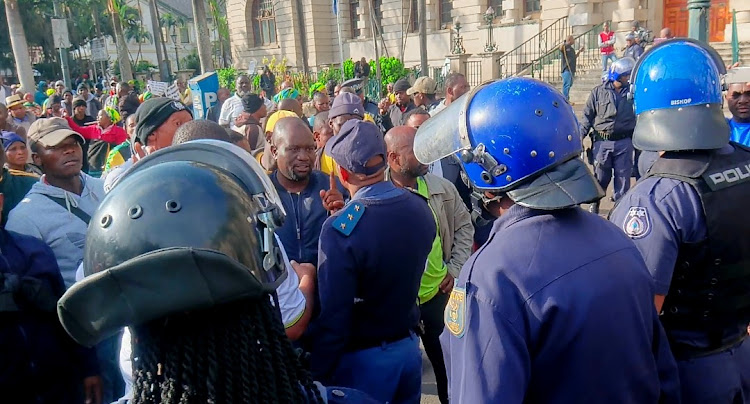 A tense standoff between supporters of eThekwini mayor Zandile Gumede and police took place in Durban on Thursday outside the Durban City Hall
Image: Orrin Singh

What started off as a handful of Gumede supporters soon grew to a group of about over 100 people who blockaded Durban city hall and stopped traffic in the city centre "to welcome her back to work".

It is understood that city hall is being evacuated following the chaos and rumours of a bomb threat. Police were not able to immediate confirm the bomb threat.

Gumede, who was asked to take a 30 days leave of absence from work, was due to return to office on Thursday. However, she will not return just yet as an ANC said an investigation into allegations of fraud and corruption against her was still incomplete.

One of her supporters, Mzomuhle Dube, said on Thursday morning that a "large number of people" had gathered in the city centre to support the embattled mayor.

When asked if the supporters were demanding that Gumede return to work immediately, Dube said: "No, we are here to welcome her back to work. This action is part of our discomfort over the decision to instate a leave of absence."

I’m informed that Zandile Gumede’s supporters have blocked off the entrances to City Hall and have stopped all traffic and taxis from passing the area. This is ridiculous. If their protest has to stop others from going to work, SAPS and Metro Police must shut it down! pic.twitter.com/GvUcUAwrXX

DA caucus leader in the eThekwini municipality, Nicole Graham, tweeted that police should shut the protest down if it prevented people from going to work.

Earlier an Independent Media journalist, Sihle Mavuso, was arrested by members of police. Police allege that Mavuso assaulted one of their officers after he was told to stop taking photos.

Reports on scene indicate that Mavuso will be released shortly as police did not know he was a journalist because he did not have an identity card visible.

A heavy police presence is visible along Durban's West Street, which has since been reopened to motorists.

However, Dube insisted that the protest was peaceful despite the gridlock in the city centre.

The eThekwini municipality's planned media tour on Thursday morning to inspect old buildings that were expected to be demolished was cancelled.

The DA in KwaZulu-Natal has reiterated its call for government to remove embattled eThekwini mayor Zandile Gumede from its ranks.
News
2 years ago

"Due to circumstances beyond our control, we regret to postpone the media tour that was due to take place today. We sincerely apologise for the inconvenience this has caused," said municipal spokesperson Msawakhe Mayisela.

On Wednesday, ANC provincial secretary-general, Mdumiseni Ntuli, told the media that they had not completed their internal investigation into the charges Gumede faces and therefore did not expect her to return to office.

"She is a member of the ANC who knows that there is outstanding work that is being done by her organisation, and I think that because she was told by the organisation to take a leave of absence she will expect the ANC to tell her that they are done. So we do not expect to wake up tomorrow and hear that comrades have gone to work because, technically, the process of 30 days has lapsed," Ntuli said.

Gumede is facing charges of fraud and corruption relating to a R208m Durban Solid Waste tender awarded in 2016, in which 62 other councillors have been implicated.

Last month, the party's provincial executive committee (PEC) resolved that Gumede should step down for 30 days to allow the governing party time to finalise its investigation.

Ntuli did not elaborate on whether Gumede had been told not to report for work on Thursday.

Embattled eThekwini mayor Zandile Gumede, 58, will not return to work just yet as an ANC investigation into her is still incomplete.
News
2 years ago
Next Article