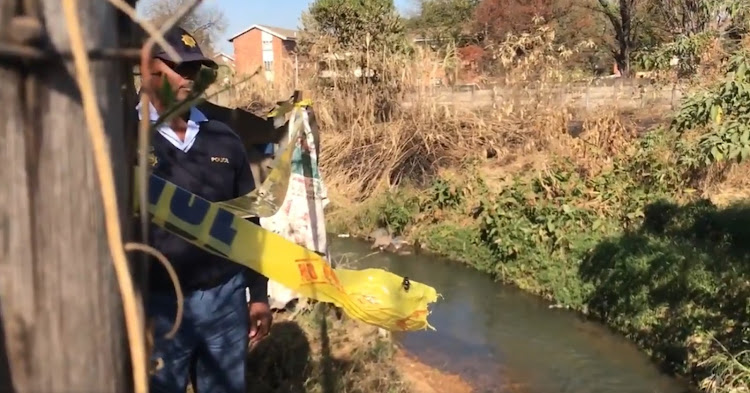 A police officer looks down towards a river where the body of a 13-year-old special needs child was found by her mother.
Image: Dasen Thathiah via Twitter

"I want the community to kill him - but first, I want the truth."

These were the words of an outraged mother who stumbled upon her daughter's half-naked body on Tuesday morning.

Joyce, 32, of the Jika Joe informal settlement in Pietermaritzburg, told our sister publication TimesLIVE she had been searching since Sunday for her 13-year-old special needs daughter, whose disability prevented her from speaking.

SowetanLIVE has chosen not to publish Joyce's full name to protect the identity of her daughter, pending the confirmation of charges to be brought against her attacker.

"She disappeared on Sunday. She never left the area where we lived, she would always be seen playing with the other children in the area," Joyce said.

She said she found her daughter's body while she was collecting water.

"I went down to the river this morning [Tuesday] at about 6.40am. I saw her body- I just screamed and called for people to come and help."

The body of a 13-year-old special needs child was discovered next to this river at the Jika Joe informal settlement in Pietermaritzburg earlier today. She was kidnapped on Sunday and killed, allegedly by a neighbour. He is on the run. #PMBChildMurder pic.twitter.com/bMSUWEeDP6

According to the bereaved mother, her daughter was wearing the same clothes that she had last been seen wearing: "She was wearing black pants, a navy jacket - which was fully unzipped - and we found her black and white sandals close by."

Provincial police spokesperson Col Thembeka Mbele confirmed the body of a 13-year-old child had been found on Tuesday.

"This morning the half-naked body of a 13-year-old girl was found near the river at Jika Joe informal settlement. Also, a member of the community believed to be in his forties was electrocuted while searching for the suspect involved. He was declared dead at the scene."

The community of Jika Joe informal settlement in PMB are up in arms after a suspect - arrested in connection with the kidnap and murder of a 13-year-old special needs child - was handed over to SAPS and not dealt with by the community. #PMBChildMurder @TimesLIVE pic.twitter.com/RZHZv3cDP5

Mbele said three men were taken in for questioning but were later released.

"The police are still searching for the suspect and arrests are imminent. Charges of murder and inquest are being investigated by Pietermaritzburg Saps," she said.

At the time of publishing, information received suggested that a suspect had been arrested by police.

Police have been approached for comment and this story will be updated.

Checking up on a suspicious vehicle in Pretoria led police to a woman who was allegedly kidnapped by a man wanted for rape in Limpopo.
News
2 years ago

Just this past week, the number of people shot and killed in Philippi, Cape Town, reached 13.
Opinion
2 years ago
Next Article