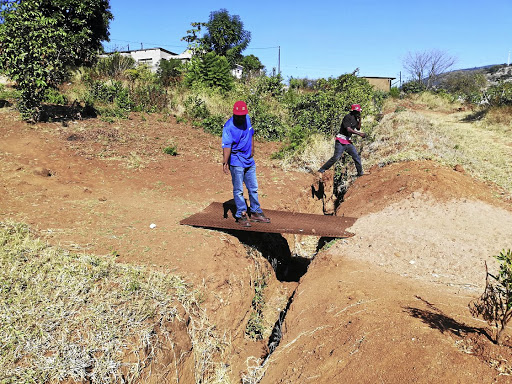 Open trenches and a small bridge are all there is to show for the R3m paid by the Greater Letaba local municipality for a multimillion rand stormwater drainage project.

Residents of GaKgapane township near Modjadjiskloof have accused the municipality of abandoning the R12m project and now placing their lives in danger come rain reason.

According to the residents the drainage system was designed to prevent their homes from flooding.

A resident who wished to remain anonymous told Sowetan that he had to spend more than R100,000 to replace his furniture damaged by floods on three occasions.

"We have lodged complaints as residents and subsequent to that, municipal officials came to see for themselves. They promised to come and complete the project but we are still waiting," he said.

Resident said they were living in fear because during rainy season, they struggled to sleep.

"In March, we experienced floods that destroyed my wall and furniture, I had to rebuild it myself. It is just a matter of time before people die in their houses," he said.

Another resident Modjadji Kgatla said their cry for help had fallen on deaf ears.

"Before the elections, mayor Peter Matlou came here and promised that they will complete the stormwater drain project as 'soon as possible'.

"Now, they left trenches open and some residents had to buy steel in order to create a path into their homes," Kgatla said. She added that the work done was nowhere near R3m the municipality claims to have spent.

According to a municipal official who wished to remain anonymous, the scope and work of the project was projected at R12m but the municipality didn't have funds.

"We shouldn't have started with the project because we didn't have the money. The contractor had to leave the construction site because the R3m was not enough for the project and he had used his own money on it," he said.

Matlou said he was not aware of the situation as he had not received a report to what was happening with the project.

Municipal spokesperson Lovers Maenetja said a contractor had been dispatched on site and would start work on July 8 "to attend to all the queries raised".

"We urge the community members to cooperate with the contractor. We anticipate that the work might take about five weeks to complete if all goes well," Maenetja said.

EFF ward 3 chairperson Carlton Mopai said they tried to engage the municipality to remedy the situation.

"These open trenches will kill a child one day.

"We are refusing to accept that R3m was spent on this shoddy job.

"We are going to escalate the matter to province as we can't have the municipality gamble with the lives of our people," Mopai said.