Mom gives birth outside clinic as nurses 'snub' her 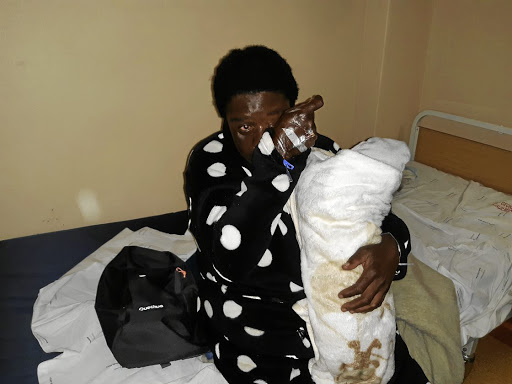 A heavily pregnant Elina Maseko, who was about to go into labour, was allegedly turned away from Stanza Bopape Clinic in Mamelodi, northeast of Pretoria, after nurses told her she was too old to be pregnant and therefore a "high risk".

Maseko, 45, was forced to give birth outside the clinic's yard on Sunday, assisted by her niece, after nurses allegedly refused to help her.

On the day Maseko, who lives in an RDP house in Mamelodi, was on her way to hospital when their neighbour's car ran out of petrol not far from the clinic.

"It was just after 6pm when I felt the labour pains. I asked my neighbour to rush me to Mamelodi Hospital and was accompanied by my niece Sibongile Morudu.

"Unfortunately, his car ran out of petrol and we had to wait for his friend. By the time he arrived, the pains had intensified and we had no choice but to go to the nearest clinic.

"The nurses at the clinic looked at my clinic card and told me that I was old and a high risk, therefore I should go to the hospital. They did not even want to listen to me."

The mother of five said the baby was ready to come out. As she approached the gate on her way out, her water broke.

Unions have called for a senior manager at an East Rand hospital to be charged for allegedly trying to conceal the true extent of the facility's ...
News
2 years ago

"I could not move. I stood there and screamed at Morudu to call the nurses. I could feel my baby was ready to come out," said a teary Maseko.

Sitting on her hospital bed at the Mamelodi Hospital, Maseko held her healthy two-day-old baby Precious and dreaded the thought of what could have happened if Morudu was not there to help deliver the baby. Morudu said when Maseko's water broke she ran inside the clinic to call the nurses.

"They blamed her (Maseko) for waiting until the last moment. I told them that the car got stuck on our way there but they said it was not their problem," Morudu said.

She added: "I went back to my aunt who was crying hysterically, saying the baby was coming. A security guard brought her a wheelchair, but the baby's head was already out, so she could not sit on it," she said.

They blamed her (Maseko) for waiting until the last moment

Morudu said she had no choice but to take off her jersey so as to welcome the baby.

She said they were very disappointed at the clinic and their next step was to sue the clinic for negligence.

Sipho Komane, a paralegal at Section 27, said they will meet with the family and advise them appropriately.

Bobby Matimba, chairperson for the Treatment Action Campaign (TAC), said they were disappointed by the conduct of the nurses.

"We are taking action regarding this matter and it's high time that those nurses who are responsible be removed from the health sector. We will also report them to the nurses council, so that they don't operate anywhere else. We will ensure that there is accountability," Matimba said.

About 400 nurses in Limpopo have been without permanent jobs since they fully qualified in January, despite the shortage of healthcare professionals ...
News
2 years ago

The maternity ward at the Tembisa Hospital has turned into a nightmare with two midwives having to look after 96 pregnant women at a time.
News
2 years ago
Next Article