Village headman 'orders' community to build him a house 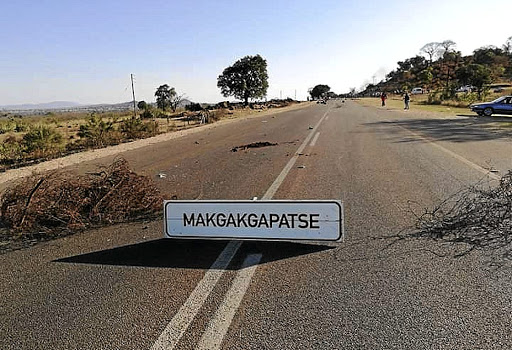 Residents of Makgakgapatse village in Limpopo barricaded the R81 after their headman allegedly demanded that they contribute towards the building of his house. / PETER RAMOTHWALA

Residents of a Limpopo village barricaded a busy provincial road for a second day in a row after their headman allegedly demanded that households contribute money towards the construction of his house.

The community of Makgakgapatse under the Mphothwane Traditional Authority in GaMamaila, outside Giyani, said they now wanted headman Mashishi Mamaila to be removed with immediate effect and be replaced with their preferred leader Albert Raseasala.

One of the protesters, Pharoah Mohale, said the royal council announced on Sunday that each household should cough up R200 and contribute towards building materials to build Mamaila's house.

"We were told that each household should pay R200 and contribute two bags of cement and four bricks. We are refusing to pay anything towards his house because this is daylight robbery," he said.

"There are about 840 households in the village and the majority are very poor. Worse, the headman doesn't even stay in the village," he said.

Mohale added that the headman received a monthly salary but is still demanding donations from poor families.

Zulu monarch King Goodwill Zwelithini has lashed out at traditional leaders who abuse women‚ calling their actions shameful to the Zulu nation.
News
2 years ago

Speaking from the barricaded R81, which link Polokwane to Giyani, Mohale said they would continue to block the road until the Mphothwane royal council removed Mamaila.

Another resident, Moses Monareng, said they travelled to GaMamaila village to submit a memorandum of demands to the tribal office under Kgosigadi Nancy Mamaila on Sunday, following the announcement.

"We told them to act immediately because nothing will move on this road. He is not a good leader and comes here only to collect money every two weeks," he said.

However, on Sunday headman Mamaila denied issuing such a demand.

"I would never ask people to build my house. I have already bought building materials for construction of my house with my own money."

Mamaila said this was "just a plot to cast doubts on my leadership".

He dared the protesters to "produce proof or recording where I said those things".

Monareng said Mamaila was not even the rightful headman to the village, hence they want Raseasala to take over. He said Raseasala was once the headman but was dethroned under mysterious circumstances.

Nancy Mamaila, the leader of the Mphothwane Tribal Authority, dismissed the allegations. "I have seen their memorandum and there is nowhere Mamaila (Mashishi) demanded money or such contributions.

"They want him removed because they are being used by a certain local businessman in the village who has interest in the royal affairs. It's a plot," she said.

She said she agreed with the protesters on one thing - that the headman should return and stay in the village.

"The process to relocate him is under way because he's now staying in GaMokwakwaila, about 50km from Makgakgapatse," she said, adding police were investigating criminal activities during the protest.