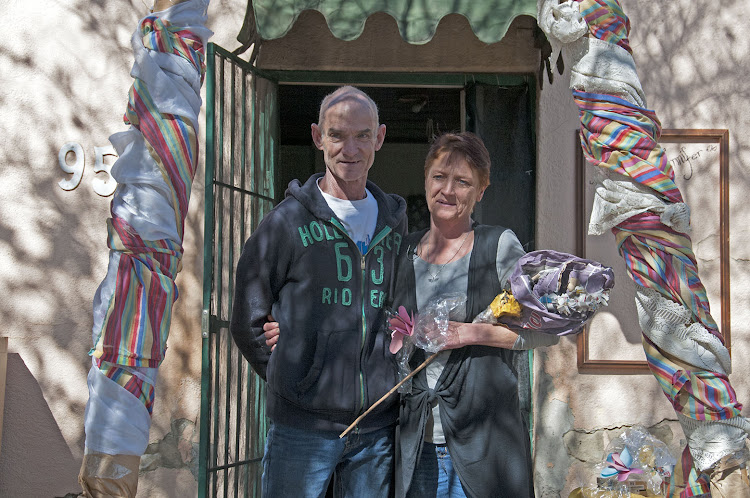 Alph and Jenny Biddulph of Brakpan outside their house with flowers made out of paper and an arch that the bridal couple walked through at their recycled wedding reception.
Image: Lucky Lekalakala/TimesLIVE

Jenny Hanley was living on the streets, recycling to survive and turning other peoples' junk into "something pretty", when she met her husband and her life was transformed in much the same way.

Hanley, 48, married Alf Biddulph, 61, on June 21 after a five-month whirlwind romance in Brakpan, a mining town east of Johannesburg.

To honour Jenny's passion for recycling, "trash to treasure" was the theme for their wedding.

Jenny arrived at the home affairs department on the back of a recycling trolley.

TimesLIVE visited the couple at their marital home, just a few blocks from the road where Jenny used to sleep.

Jenny still recycles, making up to R80 a day from tin and glass she collects from people's homes, or from the local dump. Alf works at a factory that prints designs on clothing.

Her daughter, Kayla Wessels, 25, and her four grandchildren also live on their property. As does another family. They have 12 cats and a dog named Spike.

Jenny is exuberant and outgoing, while Alf is an introvert.

They met at the beginning of the year when a homeless friend invited Jenny to a braai at Alf's house. Jenny said she thought Alf was kind – although he didn't say much.

Later that night, she said: "I went back to where I was sleeping and I was told I need to find another place to go. I had nowhere."

Alf smiled as she told how she arrived back at his home near midnight and asked if she could stay for two nights. 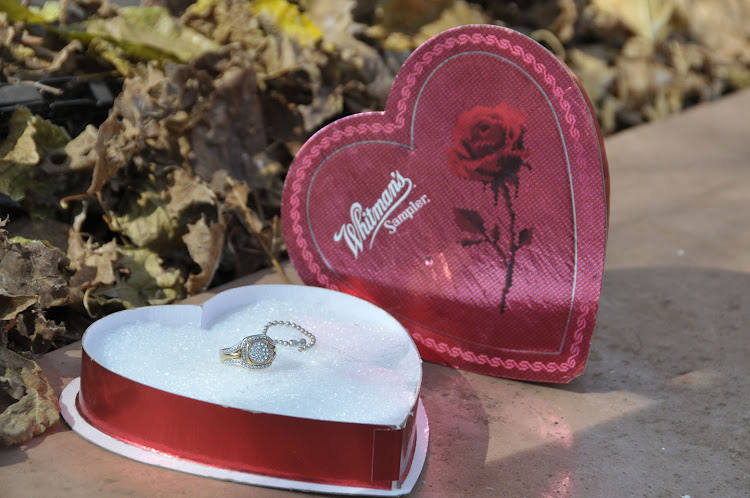 He offered her a mattress and Jenny went to sleep in his garage. "I lay on [the mattress] for a few minutes and saw bugs all over the roof - I thought: 'I'm not sleeping next to something with more legs than I have'."

So Jenny went into Alf's bedroom and told him she would be sleeping next to him for the night. "I made us a pillow-wall and he slept on his side and I slept on the other side."

Jenny had found a home.

It was she who proposed to him.

"He calls me his pushy tomboy. I used to wear boyish clothes, but now I wear bin makeup [Jenny only wears what she finds and recycles, including makeup]. I want to look nice for him and to make him proud."

Over a boerewors braai in April, "I said to him, 'let's get married'.

"He just mumbled 'Mmmm OK' and stoked the fire. But I knew he loved me by then.

"I actually had tried to leave him before that, because he says so little and I didn't know how he felt about me. 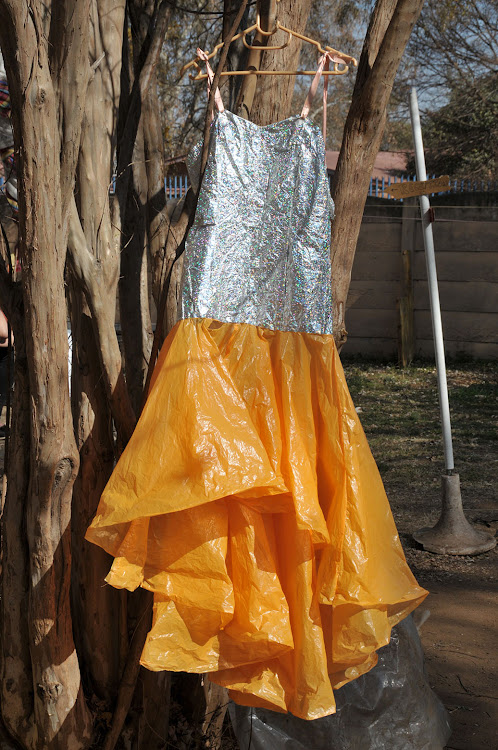 "He told me 'don't go, I actually kind of like you'," said Jenny, as Alf shyly nuzzled her neck.

Discussing the decision to turn junk into decor for their big day, Jenny said her daughter helped come up with the idea.

"Kayla said: 'Recycling is your life – why don't you have a recycling theme?'."

Jenny said the wedding day was "hectic". Her alarm clock failed to go off, her daughter woke up sick and her handmade, recycled dress broke when she put it on.

The fragile silver and orange paper-and-cloth dress tore and she had to wear a friend's white wedding dress.

The couple had their reception at home with 25 friends whom Jenny had met on the street.

All the decorations were homemade, from the outside bar to the disco ball inside.

Tables were made from scrap plastic and covered with hessian bags.

All the glassware was sourced from the local dump – spirits went in round jam jars, and beer in large pickle jars. The couple shared a large goblet from an old glass coffee container.

Jenny calls Alf her miracle and says she has never been so spoiled.

"We only have a shower [no bath], but sometimes he gets a plastic tub and fills it with bubbles for me to relax in," she said.

Kayla said she had never seen her mother as happy as she was with Alf.

"The only time I saw mom smile, slightly, was when she was digging in bins. But she is so happy with Alf. [At the wedding reception] he came to me and told me he'd look after us until the day he died."

Alf's family, however, were disapproving. Jenny said they accused her of marrying him for his money.

"They kept demanding we get a prenup – so I found one in the bin and I took it to the police station and got it stamped – there's your prenup!," she laughed.

Jenny didn't always live a life on the street.

She was raised in Port Shepstone in KwaZulu-Natal and worked as a graphic designer at Caxton.

She married her first husband in Vanderbijlpark in 2000. The couple ran a windscreen repair company and had three daughters. They moved to Brakpan in March 2017. 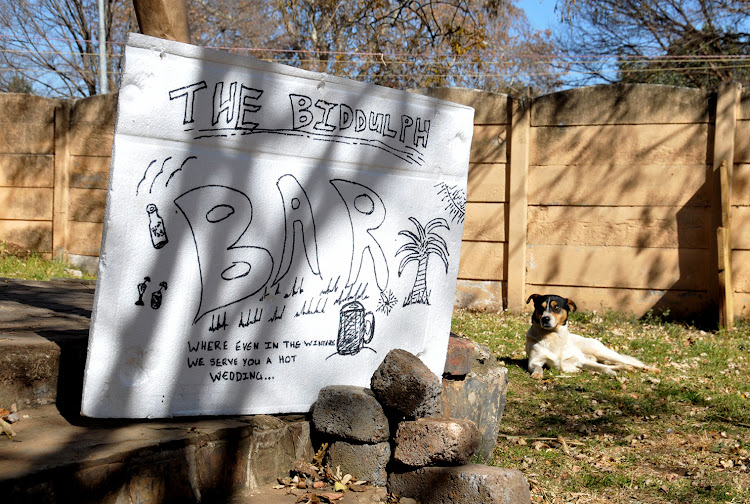 'Where even in the winter, we serve you a hot wedding'
Image: Lucky Lekalakala/TimesLIVE

She was widowed in February last year.

Jenny moved into a shelter in March 2018 after her life went into a tailspin.

After about two months, she decided to live on the street - taking only her duvet, a pillow and a pair of brown boots with her.

"I don't like people taking my freedom away. At the shelter, you must eat when they tell you and you must shower at certain times."

She said it could be scary on the streets and she feared being robbed. "Especially the meth addicts – some don't sleep for days, so you have to sleep with an eye open.

"One night, they stole the pillow right out from under my head. When I woke I saw they had taken a dump inside my shoes too. I had to walk around in socks." 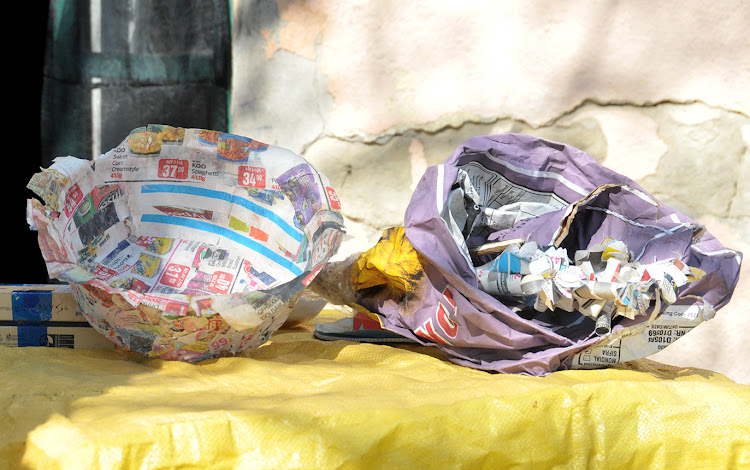 Flowers made out of paper and a paper bowl that was used during the Biddulphs' recycled wedding.
Image: Lucky Lekalakala/TimesLIVE

Sometimes she thinks about her old life and how she did not appreciate what she had.

Jenny said living on the street gave her a happiness she did not have in her old life. And recycling gave her back her dignity.

"Junk is my joy. To me junk is part of a cleansing process. You take something ugly and make it pretty."

Everything in the couple's home has been recycled.

Alf likes to collect offcuts of printed material from which he constructs big collages.

Jenny paints, sews, fastens and welds materials to make sculptures for their home.

Her goal is to work with children at local schools to teach them the joy of upcycling.