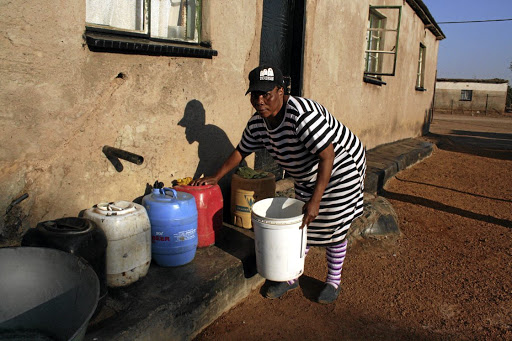 Girlie Monareng is now used to going for up to three days without water in the village of GaPhaahla near Siyabuswa in Mpumalanga.
Image: Isaac Mahlangu

Girlie Monareng often applies Vaseline without taking a bath as the village's taps sometimes run dry for up to three days leaving villagers without any other alternative.

The village of GaPhaahla near Siyabuswa in Mpumalanga is one of the communities worst hit by a water crisis in the Dr JS Moroka local municipality.

For about six weeks now, the municipality has been struggling to meet the demands for water and has resorted to switching off the taps.

Monareng, 51, a farm worker, and her family have got used to being without water, so much so that they have water permanently stored in 25-litre buckets and plastic bottles in their household.

When Sowetan visited the family, they were running out of stored water, and had been without running water for more than a day.

"This is the life we have gotten used to, we often go for three days without a drop coming out of our taps," Monareng said.

She said taking a bath was becoming a luxury. They saved the little water they have to cook and drink.

"My two children went to school for two days without taking a bath before the school closed... we just apply Vaseline in the morning and go to work," Monareng said.

Her daughter, Sphiwe, 32, said they have been kept in the dark on what caused the shortage.

"We have elderly people who live alone in the community, they can't even go anywhere to look for water," Sphiwe said.

A block away, Girlie Mtsweni wondered where she would get water as she could not afford to buy it.

She pleaded with the municipality to "at least send us water tankers".

Spokesperson for the Dr JS Moroka municipality Mmasabata Ramatsetse said water problems were beyond their control as the water had dried up in the dam.

"The source of the water challenges being experienced is drought, a natural disaster that has affected the Mkhombo Dam... [which is now] at the lowest level," Ramatsetse said.

She said the municipality had to reduce the abstraction of water from the dam by more than half.

Ramatsetse said they were in talks with the department of water and sanitation to get water sourced from the neighbouring dams.

"We urge our communities to use the little water they have sparingly," she said.

"The administration had known since 2009 that the dam would run dry and have done nothing," convener Jackson Malatjie said.

Malatjie blamed the municipality for failing to maintain the water network system.

Ramatsetse said the system had been "vandalised" and they were investigating but had not established how much it would cost to repair it.

Load-shedding starting to trouble water delivery in parts of Jozi

Load-shedding has started affecting water delivery to some high-lying suburbs in Johannesburg.
News
2 years ago

Contingency plans to ensure the provision of essential services are being drawn up by the City of Johannesburg as it tries to mitigate the crippling ...
News
2 years ago
Next Article