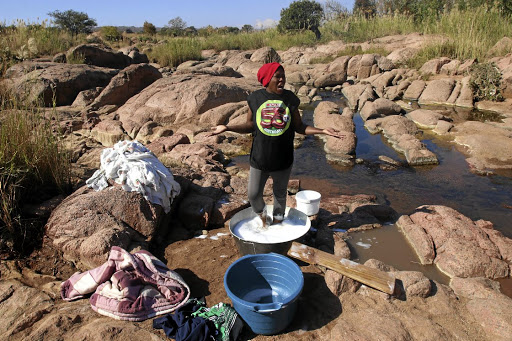 The residents of a cash-strapped Limpopo municipality are forced to share water with animals from a contaminated river about 2km from their village.

Makhuduthamaga local municipality in Jane Furse is accused of wasting R1.4m on the State of the Municipality Address in April.

Resident Annah Malapela, 59, from Makgathe village outside Jane Furse, said she has seen only dry taps since October last year.

Malapela told Sowetan that the municipal officials had announced that on Thursday the taps would no longer run dry, as had happened for the past nine months.

"I woke up early in the morning and now it's almost 2pm. There's nothing coming out of the taps. We are suffering in this village and we are now forced to draw water with animals in the Ngwaritsi River which feeds Lepelle," she said.

Another resident, Sara Matseba, 38, said running water was a luxury in Makgathe village.

"I came here in the morning to do my laundry. I pushed that wheelbarrow with my washing dish and dirty clothes for 2km," she said. "We also drink this water because we have no choice," she said.

The DA in Limpopo said it had written to the MEC for co-operative governance, Bioskop Makamu, requesting that he establish an independent forensic audit on the financial affairs of Makhuduthamaga municipality in Sekhukhune.

Municipality spokesperson Lemson Moropjane said it was compiling a report and will release a detailed media statement soon.

Smalle said: "It does not make sense for the municipality to be spending millions of rand while residents continue to live in abject poverty without access to water or employment opportunities."

Rand Water thanked customers on Wednesday afternoon for controlling their water usage during a 54-hour shutdown as it repaired a major water pipe.
News
3 years ago
Next Article