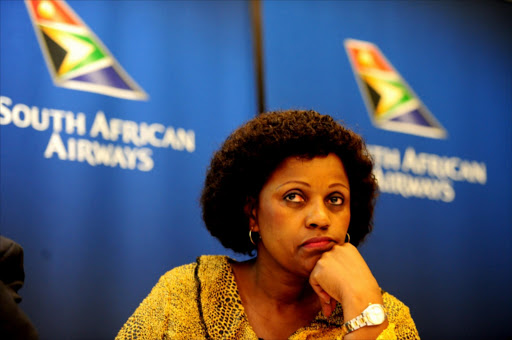 Dudu Myeni and her right-hand woman‚ Yakhe Kwinana‚ allegedly interfered in senior appointments at SAA‚ using their influence as board members "irregularly" to hand down instructions on whom to appoint and whom to discipline.

This according to former SAA human capital manager Mathulwane Mpshe‚ who on Monday told the state capture inquiry how she was instructed‚ either by Myeni or Kwinana‚ to appoint people to senior positions without following normal processes.

"In my personal experience‚ the chair (Myeni) will give instructions to appoint persons in certain positions and ask for disciplinary actions to be taken against employees ... She will just come and say appoint this person in this position or discipline this person for this‚" Mpshe said.

"The role of the board is oversight in the company‚ the role of the executive is operational ... It was unusual that you would get a non-executive director giving instructions that we have to appoint an individual.

"The non-executive directors will be responsible for the appointment of the CEO and the CFO. The rest will be the responsibility of the CEO for the first-line executives."

Allegations that SA Airways (SAA) staff faced pressure to comply with dubious instructions‚ how the airline's board micromanaged tenders and how ...
News
3 years ago

Mpshe gave two examples of such interference‚ the first being the appointment of Captain Mpho Mamashela as chief operations office (COO) for SAA‚ an instruction allegedly handed down by Myeni in March 2015.

"We had started the Section 189 process of retrenchments. This position of COO was not even in the organisational structure of SAA at the time. When we embark on retrenchments‚ you have to define the new roles‚ and in consultation with labour‚ and look at the structures‚" Mpshe said.

"We had just embarked on this process of retrenchments‚ the structures had been approved and it was unusual that [Myeni] wanted changes to be made afterwards ... This instruction‚ I did not carry it out.

"It was a tussle at that time and I was already perceived as someone who is obstructive. My concern was that this position was not even in the organisational structure."

The second instruction allegedly came from Kwinana. Mpshe said she was told to appoint Eric Manentsa as head of flight operations during a risk and management committee (Ramco) meeting.

"[Manentsa] was chief pilot at the time. On this instruction‚ I raised my concerns at the Ramco meeting to say that I find it highly irregular that a member of the board will raise an issue like this in Ramco ... I said it will create a very wrong precedent‚" Mpshe said.

She said he was appointed‚ but “after a while in the position I was informed that Manentsa was not coping‚ so he reverted back to his original position".

The state capture inquiry heard on Wednesday how a culture of fear engulfed South African Airways (SAA) under Dudu Myeni and how the airline's little ...
News
3 years ago

Former SAA chief financial officer Phumeza Nhantsi told the state capture inquiry on Wednesday of a culture of fear and political interference that ...
News
3 years ago
Next Article