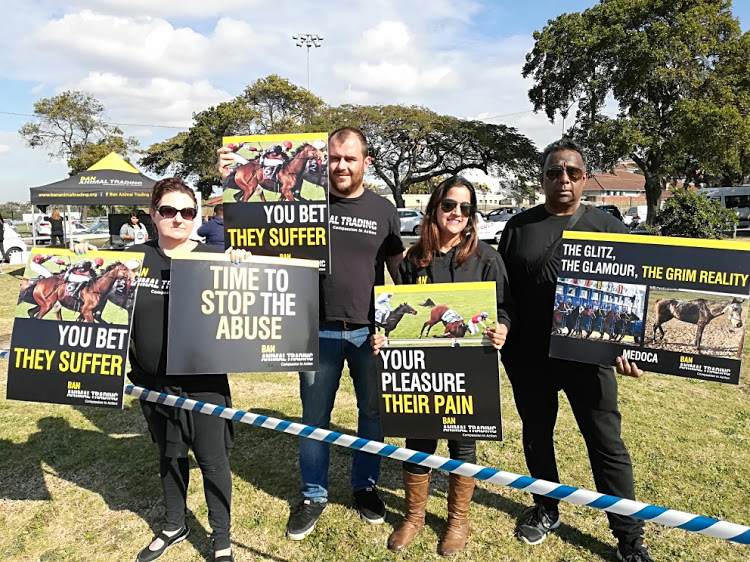 Ban Animal Trading SA activists protest at the Durban July in 2018. They say the glamorous sport has a dark side which includes unethical training methods and horrific injuries and deaths on the course.
Image: Nivashni Nair

A group of animal rights activists will gather outside Durban's Greyville Racecourse on Saturday morning to protest against the country's biggest horseracing event.

Ban Animal Trading SA said the protest was not aimed at bringing the 123rd Vodacom Durban July to a halt.

"Just like last year, the aim of our protest against the Durban July this year is to raise peaceful awareness about the horrific realities of the horseracing and betting industry in South Africa. We are not going to bring the event to a halt at all, as we believe in creating awareness and encouraging people to make compassionate choices," the organisation's Saihashna Rajkumar said.

She said behind the glitz and glamour lay "a very dark side to the horseracing or betting industry that the general public isn't aware of".

"These include unethical training methods and illegal stimulants, and horrific injuries and deaths on the course. Racehorses' lives are tragic from beginning to end."

At least 50 people are expected to participate in the peaceful protest.

The annual event is the biggest and most prestigious horseracing event in the country. It attracts more than 50‚000 people‚ who cram the confines of the racecourse to take in the fashion spectacular‚ entertainment and horseracing. Millions of others watch the spectacle on television.