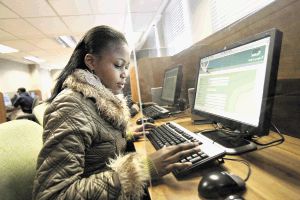 In the two years since they started operating, the crowdfunding platform Feenix says it has been able to raise in excess of R25m which was used to support 900 students.

The platform was born out of the #FeesMustFall movement of 2015 and 2016, and aims at helping the "missing middle" - those who do not have access to the R111.2bn allocated by government for free education.

De Beer says that over half a million youth require funding to pursue tertiary education in order to gain the skills necessary to obtain employment, and South Africa’s “missing middle” constitutes 40% of these youth.

Employment initiative an opportunity for youth to get head start

Janine McEwan‚ 29‚ had been out of a job for five years‚ but thanks to the Youth Employment Service (YES) initiative‚ she is now among 100 young ...
News
3 years ago

Encouraging more businesses to contribute to student funding, De Beer says “business leaders can create much-needed change, especially in areas where most people continue to rely on assistance from government. These are the communities their employees are part of.”

Donating to students through the Feenix funding vehicle also provides funders with a number of tax incentives, such as a Section 18A certificate to all businesses and individuals who donate to the platform, she adds. Businesses can also improve their B-BBEE score as Feenix qualifies for B-BBEE points in the Skills Development and Socio-Economic Development categories.

The department of trade and industry (dti) has recently published revisions to the B-BBEE Codes of Good Practice. These revisions include key changes to Code 300, which specifically deals with Skills Development expenditure. This code now allocates four points as an incentive to employers to encourage concerted contributions to bursaries for black students at all higher education institutions, says De Beer.

Retailer Woolworths recently announced it would recruit approximately 450 learners in 108 stores in South Africa and at their head office for a period of 12 months under this flagship programme.

Rylands said the retailer already believed in career progression within its business, as a way to improve the diversity of its workforce and potential talent pool. "This is part of our role as a responsible corporate citizen in South Africa."

She said the YES programme would be aimed at equipping its candidates with key skills and preparing them with "a work-readiness toolkit".