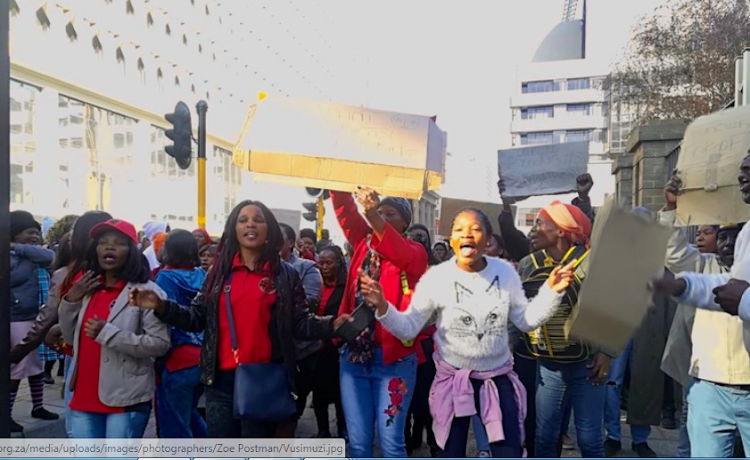 About 50 Vusimuzi community members and supporters picketed outside the South Gauteng High Court on Thursday as they waited for their court case to be heard. On Friday morning, the court interdicted the City of Ekurhuleni from reblocking the informal settlement in Tembisa until the matter is heard in July.
Image: Zoë Postman

On Friday morning, the South Gauteng High Court interdicted the City of Ekurhuleni from reblocking Vusimuzi informal settlement in Tembisa, at least until the matter is heard in July.

About 130 community members, who are part of the shack dwellers movement Abahlali baseMjondolo (AbM), took the city to court in an urgent application to stop it from reblocking. They said the reblocking process was imposed on the community without meaningful consultation.

The order was handed down by Judge Brad Wanless after arguments were heard on Thursday. The Socio-Economic Rights Institute (SERI) represented the community in court.

The reblocking (which is a controversial process) involved repositioning shacks in the densely built informal settlement to open up pathways and roads for emergency vehicles and the provision of water, electricity and sewerage. But it required some residents’ homes to be demolished and rebuilt in different places, and in many cases to give up living space that they have built up over many years.

Thulani Nkosi, senior attorney from SERI, argued that the city had not meaningfully engaged and obtained consent from the community before implementing reblocking in January 2018.

Ridicule on social over donation
News
2 years ago

Even if some residents had consented initially, Nksoi said it was no longer “good consent” after seeing the damage reblocking had caused.

He said some demolitions were carried out when residents were at work. When GroundUp visited the area in April 2018, residents’ belongings were strewn across their yards. Their belongings had been removed while parts of their homes were demolished to make way for the roads.

After reblocking, Nkosi said children were no longer able to play in their yards because their space was too small.

“Everytime a home is demolished [during reblocking], somebody loses property and loses their right to housing … that’s really the problem that [the community] has,” said Nkosi. “Rights are supposed to be progressively realised…How are we progressively realising the rights of someone who lives in a brick structure that is knocked down and [replaced] with a shack structure?”

Squatters square off with municipality over evictions

Shack dwellers’ movement Abahlali baseMjondolo approached the Durban High Court on Monday to stop the eThekwini municipality from carrying out ...
News
3 years ago

In Vusimuzi some people live in shacks and others in brick houses. One resident, Joseph Sithole, has lived in one of the brick houses there for 18 years. One room and part of his lounge had to be demolished for reblocking.

“Some people’s houses were completely destroyed. Those whose homes were of a reasonable enough size for their families had their homes forcibly reduced into small sizes that were not viable for their families,” AbM said in a statement released on Wednesday. This was done without warning or consent from community members, according to AbM.

Emmanuel Sithole, the advocate representing the city, denied that consent had not been obtained. He said the community had even written a petition to the city requesting that reblocking be expedited because the community needed the services.

“[The city] had to go out of its way to get money it had not budgeted for in that financial year to start the reblocking process,” he said.

Sithole made a distinction between demolitions and reblocking. He said SERI kept referring to reblocking as “demolitions” but “they don’t finish the sentence”.

“If they had said ‘demolitions and rebuilding elsewhere’, we would have accepted that, but they just leave it at ‘demolitions’… What we are doing is not demolishing, we are developing the community and providing them with services that they desperately need,” he said.

But Nkosi said it did not matter what it was called. “The fact is that people’s homes are being demolished in the process without their consent,” he said.

Sithole said that if the court found reblocking to be unlawful, it would prevent other community members from receiving services. He claimed that resident, Joseph Sithole, who is an applicant in the case, had already received electricity and was now preventing others from receiving it.

“He has rebuilt his home after benefiting from our services and now he is blocking everyone behind him from getting services,” said Sithole.

But Nkosi disputed that Joseph Sithole had electricity in his home. “There is an electrical Eskom pylon with wires by his house, but it has not been connected. There is no electricity running through his house,” he said. “In fact, [Joseph Sithole] has been told that the day he removes his wall is the day he will get electricity.”

Nkosi said Sithole had failed to mention another applicant whose house had not been demolished yet. “She fears that if reblocking happens, her house that she has built with her hard earned money will be affected.”

Sporadic skirmishes between police and members of the Abahlali baseMjondolo Shack Dwellers movement continue in Cato Manor with the latter crying ...
News
4 years ago

Nkosi said there were another 130 community members cited as applicants which Sithole failed to mention.

Sithole argued that “no brick structure was ever demolished” during reblocking. His statement was met with audible disagreement from community members in the courtroom.

When Judge Wanless asked what happened if a brick house was in the way of a road, Sithole said: “That’s why when we do our planning, we structure it in a way that the structures are moveable.”

Sithole invited Judge Wanless to visit the area and see “the difference reblocking has made”.

The ANC only talks about land because their primary objective is to harvest more votes. This is the view of Abahlali baseMjondolo a prominent shack ...
News
4 years ago

“One can actually drive on the roads now and emergency services can move through … We have done [reblocking] for many informal settlements who have benefitted from this so we don’t know what the problem is here,” said Sithole.

After the order was made, Sithole immediately noted the city’s intention to file a notice of appeal. The case was postponed to 16 July for finalisation of arguments.

Resident Happy Ndebele said she was not happy that the city would appeal. “I don’t even know what to say. I believe we won the case but [the city] wants to watch us suffer and that makes me sad,” she said.

Her shack initially had seven rooms, built up over 20 years, but it was reduced to four rooms during the reblocking. “There is no space for my grandchildren now … They can’t even play outside because [the City] has made my yard too small,” she told GroundUp.

She said she hoped the city would stop reblocking and that her home would be restored after the court case.

Carrie Esterhuizen and her two small children were in the hostel at the Cremona Cheese Factory in Tshepisong‚ Johannesburg‚ when angry land occupiers ...
News
3 years ago

Two Durban-based human rights organisations have slammed the ruling ANC party for having failed South Africans, 25 years after the birth of ...
News
2 years ago
Next Article