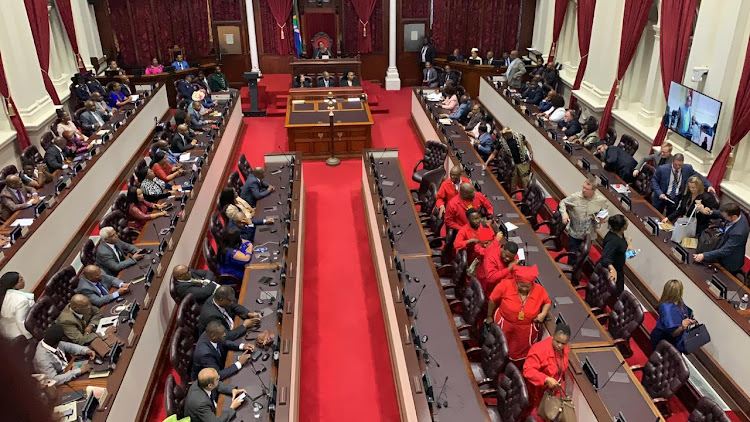 Former president Jacob Zuma’s attendance at the state of the province address in the KwaZulu-Natal legislature in Pietermaritzburg caused a stir on Friday, causing DA and EFF MPLs to walk out.

Chaos erupted when the DA objected to speaker Ntobeko Boyce about Zuma’s presence, as he was not a member of the provincial legislature. The DA was joined by the EFF, which also objected to his presence, and that of former premier Willies Mchunu and former deputy speaker Meshack Radebe.

However, the IFP, which dislodged the DA as the official opposition party in the province after the May 8 elections, remained in the legislature.

The issue was later resolved and the parties returned, allowing KZN premier Sihle Zikalala to continue delivering his address.

It was not the first time the former president’s presence in the provincial legislature had caused controversy.

Chaos errupts in the KZN Legislature as opposition parties staged a walk out before the Premier could deliver his State of the Province address. An objection was raised about non-members of the house seated within the room, this was dismissed by the speaker @TimesLIVE pic.twitter.com/7i3F8wPTx8

There was confusion about Zuma’s invitation as a special guest to former agriculture MEC Themba Mthembu’s budget vote in May last year, which also resulted in opposition MPLs from the DA, EFF and NFP staging a walkout in protest against his presence.

However, Mthembu, the SACP’s provincial secretary, denied having invited Zuma. He said he had invited Zuma's wife, Sizakele MaKhumalo, because of her role in agriculture. MaKhumalo runs the Qedisimo Sendlala Co-operative, which helps women in the poverty-stricken KwaNxamalala village to produce their own food.

But a statement issued by the provincial agriculture department contradicted Mthembu’s version of events. It said Zuma was included on the department’s stakeholder list due to his passion for agriculture.

Zuma’s invitation was believed to have also incurred the wrath of SACP leader Blade Nzimande, who was fired by the former president as higher education minister during a late-night cabinet reshuffle in October 2017 after relations soured between the two.

It has been reported that former president Jacob Zuma will be appear before the Zondo Commission in July.
Opinion
2 years ago

Former president Jacob Zuma has urged the youth of the ANC to use next year’s National General Council (NGC) to reignite the fight for economic ...
News
2 years ago
Next Article