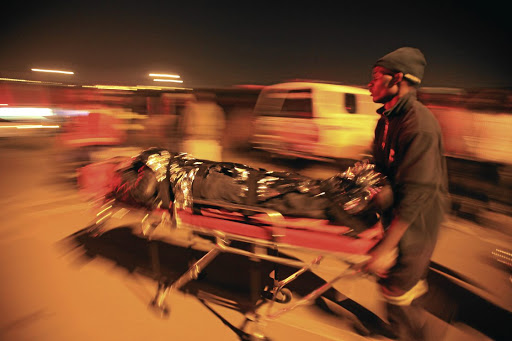 Yesterday, EMS spoksperson Robert Mulaudzi said they would engage police on their challenges following yet another robbery of an ambulance crew in Dobsonville, Soweto, in the early hours of yesterday morning.

Mulaudzi, however, warned that if this happened, patients might have to wait longer to access emergency services in the city.

"We are considering working with police for escorts when we go out to call-outs. However, that would mean a delay on response time and the public will suffer," warned Mulaudzi.

He said two paramedics were robbed of their belongings at gunpoint while attending to a patient in Dobsonville.

A KwaZulu-Natal emergency medical services paramedic was held at gunpoint and robbed while attending to a patient in Phoenix, north of Durban on ...
News
2 years ago

Mulaudzi said paramedics were at risk and unfortunately they were being targeted in the communities they must go into and rescue lives. He said this was a second incident in less than two weeks.

"It's a serious concern that the paramedics are not safe as they go out to help the community," Mulaudzi said.

Police spokesperson Mzwakhe Xazi did not respond to requests for comment despite promising that he would.

In another incident in KwaZulu-Natal on Wednesday, a paramedic was robbed at gunpoint while attending to a patient in Phoenix, north of Durban.

Lt-Col Thulani Zwane said the paramedic was in the Brookdale area when he was approached by three men around 8.15pm.

"He was accosted by three armed men who robbed him of his cellphone. A case of robbery was opened," said Zwane.

These incident come just a week after two emergency staff were robbed and shot at in Inanda.

They were lured to the Amatikwe area with a fake emergency call.

South African Emergency Personnel's Union spokesperson Mpho Mpogeng said: "We still stand on our word that our personnel should arm themselves and the department must start implementing plans to eradicate these attacks."

He said clinics must also start opening on a 24-hour basis so that paramedics may stop going door to door and fetch patients.

"Most of these crimes happened at night and early hours of the morning, that is why we want our members to start working six-to-six so that they can be safe," said Mpogeng.

He, however, said the attacks on personnel had decreased in the past year following their call for paramedics to arm themselves.