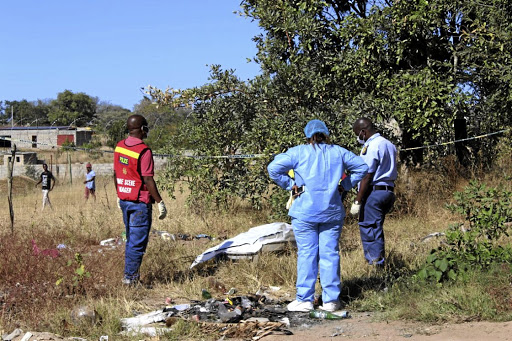 Police exhume the decomposed body of Nokulunga Mbatha who was allegedly killed by her boyfriend and bundled inside a briefcase before being buried in a shallow grave in Bushbuckridge, Mpumalanga. / Mandla Khoza

For three months, the family of Nokulunga Mbatha had been in contact with her alleged killer who stuffed her body in a suitcase before burying it in a shallow grave but he apparently denied knowledge of her whereabouts.

Police believe Nokulunga, 21, was murdered by her boyfriend who later put her body in a suitcase and buried her in Bushbuckridge, Mpumalanga, in March.

"His mother started questioning him about his short temper and behaviour and the accused confessed to having killed his girlfriend by hitting her with a sharp object and burying her in the yard in their village home," Bhembe said.

He said Ndlovu took his mother to the place where he pointed out the shallow grave and police were contacted.

Ndlovu was then arrested.

He appeared briefly in the Mhala magistrate's court yesterday and his bail application was postponed to July.

Nokulunga's grandmother Mavis Mbatha told Sowetan that her granddaughter left Johannesburg, where the family lives, on February 2, saying she was going to visit Ndlovu in Bushbuckridge.

Mbatha, who is originally from KwaZulu-Natal, and Ndlovu had two children together.

"This is very shocking. This boy told us that he doesn't know where my granddaughter is," said a sobbing Mbatha.

"When we called his mother saying Nokulunga told us that she was visiting him (Ndlovu) she denied that she ever arrived in her home.

"On Saturday, I got a call from her, saying they had found Nokulunga but she was dead because Kevin killed her. I nearly died.

"This boy has been denying that my granddaughter arrived at his house yet he knew that he killed and buried her and then came to Johannesburg. He is very cruel," said Mbatha.

Mbatha said Nokulunga's brother will have to do a DNA test to help identify her decomposed body.

A Port Elizabeth father and his seven-month-old daughter were shot and killed in their bed in a suspected hit.
News
2 years ago

News of bail being denied to the surviving suspect in the Vlakfontein family murder case was met with applause from community members seated in the ...
News
2 years ago
Next Article