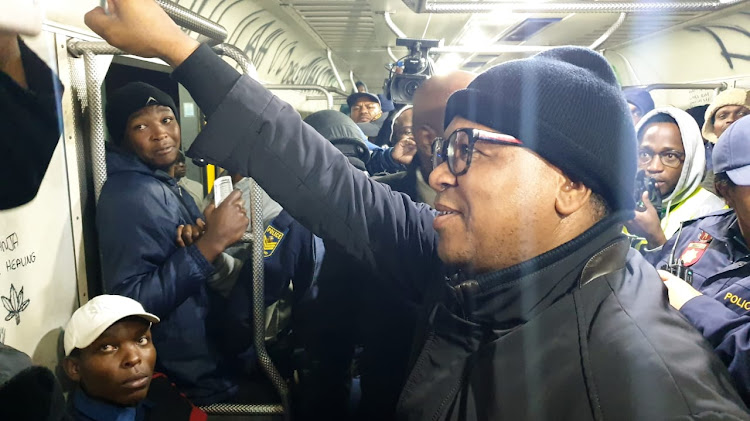 Transport minister Fikile Mbalula chats to commuters on a Metrorail train from Khayelitsha to Langa in Cape Town that started an hour late and never reached its destination. The train's seats had been ripped out, most of the windows had been removed and there was graffiti all over the carriage.
Image: Dan Meyer

New transport minister Fikile Mbalula has re-dubbed himself the man to fix our problems - including the Western Cape’s troubled rail service. On Tuesday morning he took a short train ride to see first hand the struggles that commuters deal with daily.

Mbalula outlined his vision for a solution to the crisis in the rail sector, saying more consistent management structures and better security are required.

The Cape metro service has been plagued with arson, vandalism, cable theft and rampant crime in the past five years, leading to the erosion of its capacity to operate effectively and reliably.

Mbalula got an immediate taste of commuter frustrations when the train from Khayelitsha to Langa was delayed due to a loose wire hanging over the tracks, as well as a passenger incident - meaning that he could not complete the journey and was instead shuttled from Philippi to his final destination.

The train itself was badly damaged: seats had been ripped out, most of the windows had been removed and there was graffiti covering large portions of the carriage.

"The train is vandalised," said an unimpressed Mbalula. "I can easily be thrown out of one of these windows."

The train left an hour later than expected and was unable to complete the journey.

Unlike the minister, most travellers don’t have the luxury of a shuttle service to rely on when trains are delayed.

“We want government and the ministers to make a change," said one commuter. "Yesterday there were no trains. I tried at 4pm but then was stuck in Ysterplaat until 6pm. After 8pm there were no more trains."

"It's not safe for us, especially women," she added. "Sometimes the tsotsis come in the train and rob us of our phones, money, everything." 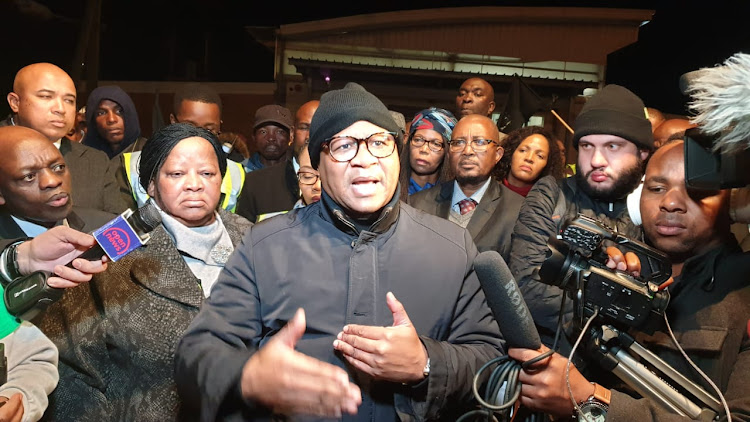 Mbalula admitted that the sector was in "deep crisis", but assured aggrieved passengers that their "cries are heard".

"Indeed we have been down this road. Unfortunately, the changes were ad hoc,  temporary and unsustainable," he said.

"Public transport is a fundamental cornerstone of service delivery to the poorest of the poor. That cannot be overemphasised."

Mbalula promised to bring stability to executive positions at Prasa "in less than three months".

He added that Capetonians should not get their hopes up about high-speed trains similar to the Gautrain just yet, something hinted at by President Cyril Ramaphosa in his recent state of the nation address.

"Speed train is not our priority. Our agenda is to modernise, but the working class must feel first that there is change in relation to the means of transportation," said Mbalula.

You’ve heard before people saying they will fix PRASA and rail in general in South Africa.

What is different this time ?

Here is my explanation. pic.twitter.com/GsOwgW03sc

"If I can't fix things with my team, then I must ship out. If I don't tell the president what our priorities are, then who is going to do it? The president has asked that I fix this within a year, not five years," he said.

"If you are unable to fix the structural issue at Prasa, we will have a big problem. There are people sitting in offices with nothing to do," she said. "We understand the role of Prasa in society and the role you play, and we are hoping that you will be able to assist black society in this country. You never see these problems in places where wealthy people are taking trains," she said.

Mbalula said he had spoken to police minister Bheki Cele, who had pledged to allocate more officers to trains.

"We need real police officers, who are armed. They need to protect people and understand their mandate. They must go toe-to-toe with criminals. The mandate for railway security falls under that department. We need proper security. They need to marshal this area," he said.

"We have already put in place the question of the war rooms, which exist 365 days a year [at a national level], where we can ask the question: what needs to be done in Cape Town?"

Mbalula said community involvement would be important in solving the issue.

"You can't build a shack on a railway line, it's not normal. People steal cables, they burn trains, they do as they wish. Communities must know that it's illegal and it's dangerous," he said.

Mbalula will hold talks this weekend with Prasa and the Railway Safety Regulator (RSR) to come up with a collaborative strategy he hopes will be put into effect "immediately".

Transport minister Fikile Mbalula yesterday waged war against road carnage and announced that the working hours of traffic officers in Limpopo will ...
News
2 years ago

The country's poor road safety record, ineffective law enforcement and the need to introduce safer cars are some of the critical challenges that new ...
News
2 years ago
Next Article