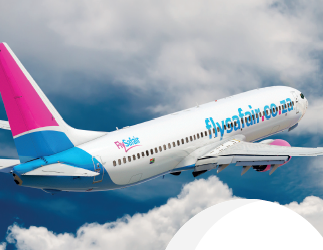 FlySafair delayed a flight after a man collapsed and died shortly after boarding a plane from Johannesburg to Cape Town on Tuesday.
Image: Facebook/FlySafair

Local airline FlySafair has been hit by yet another misfortune - this time when a man passed out and died while boarding a flight from Johannesburg to Cape Town on Tuesday.

"It is with immense sadness that FlySafair confirms the passing of one of our customers, who was in the process of boarding flight FA200 from OR Tambo International to Cape Town International Airport," said the airline.

FlySafair’s head of sales and distribution, Kirby Gordon, described the incident as unfortunate. The flight was scheduled to take off at 5.55am.

The man was reportedly not feeling well when he arrived at the plane. "One of the crew members asked him if he was alright and gave him a seat right at the front. As soon as he sat down, he passed out," said Gordon.

The airline said paramedics were immediately called to assist but were unable to revive the man.

"Our thoughts and prayers are with everyone connected to this person - and with those who witnessed this tragic event this morning," said the airline.

The incident led to several delays.

The man's death comes after a foetus was discovered in a toilet of a FlySafair aircraft at Durban's King Shaka International Airport on Friday morning.

'Both sides were misunderstood,' says FlySafair on Mihlali's racism claims

Low-cost airline FlySafair and YouTube fashionista Mihlali Ndamase have come to an ambiguous truce.
News
3 years ago
Next Article