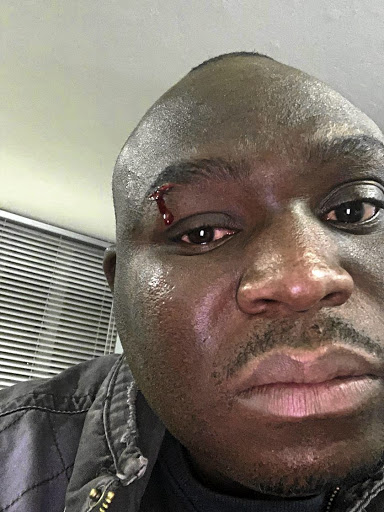 A 38-year-old man was attacked and allegedly called a k-word at a petrol station apparently because he was wearing an EFF branded cap.

Ron Rambebu told Sowetan how he was blindsided and viciously assaulted while he was sitting in his car at the Engen garage on Kingfisher Road in Horizon Park, Roodeport, on the West Rand.

"At first I didn't know what was happening because I had just paid the attendant and was getting ready to leave, so my initial thought was that I was being hijacked. I felt an intense amount of pressure on my face but didn't understand what it was - I thought maybe the station was collapsing," Rambebu said.

A video of Rambebu's attack went viral on social media at the weekend and left many wondering what the root of the attack was.

We must forgive and forget!! But we are reminded everyday. Mama give us a signal, what must we do in this case @ZindziMandela @AsktheChiefJMPD @EFFSouthAfrica @effjoburg pic.twitter.com/114S9Z7Nt8

"The guy kept speaking Afrikaans to me while punching me and I didn't understand what he was saying. I wanted to fight back but everything was happening so quickly. I didn't have a weapon on me so I parked my car and got hold of a spanner at the garage but they fled before I could do anything," he said.

Rambebu was left with a huge gash above his right eye following the attack.

"I was traumatised and shocked because I don't even know those guys.
You could also see that they were either drunk or high because nobody in their right mind would do something like that," he said.

Police spokesman Capt Kay Makhubele said the police were investigating the matter but no arrests have been made.

Most South Africans do not want to their politicians playing race games – instead‚ they want them to focus on creating jobs and fixing the economy.
News
2 years ago