EFF MPs on Tuesday walked out of the National Assembly, saying they were not prepared to be addressed by a "constitutional delinquent" - referring to public enterprises minister Pravin Gordhan.

Just as Gordhan was about to begin his speech during the state of the national address debate, EFF leader Julius Malema stood on a point of order, objecting to the former finance minister speaking in the House.

"I don’t think it will be advisable to allow Mr Gordhan to speak here because the public protector has made findings against Mr Gordhan," said Malema.

This was in reference to a report by Advocate Busisiwe Mkhwebane, which found that Gordhan had acted improperly doing his time as finance minister in the payment of an early retirement benefit to former Sars deputy commissioner Ivan Pillay.

"The public protector has made findings against Mr Gordhan and you allow a constitutional delinquent to speak here," Malema said as he made his point to deputy speaker Lechesa Tsenoli.

Tsenoli, however, refused to budge.

But Malema lost his cool, even labelling Tsenoli a "Mabena" in reference to a viral video where a soldier named Mabena is described as being one who always disappoints.

"But listen, Mabena, listen Mabena… I'm not done. You are doing the same mistake you did even with the previous parliament. You cannot show a middle finger to a chapter nine institution by allowing a constitutional delinquent to come and speak here," said Malema in his exchange with Tsenoli.

"That's a political statement and you are out of order. I warned you that I will switch off the mic. Take your seat," said Tsenoli.

"Okay, deputy speaker, we will wait outside and when the constitutional delinquent finishes we'll come back," said Malema.

Malema says EFF MPs will wait outside and return when Gordhan is done talking.

ANC deputy chief whip Doris Dlakude says they can't allow a situation where the minister is embarrassed by Malema. She explains that Gordhan took the PP report to court for review.

ANC deputy chief whip Doris Dlakude said they would not allow for Gordhan to be "embarrassed".

"The point of order is that the minister has took the report for review, it's his right to do so," said Dlakude. 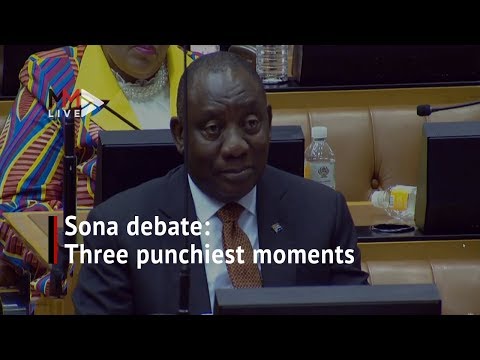