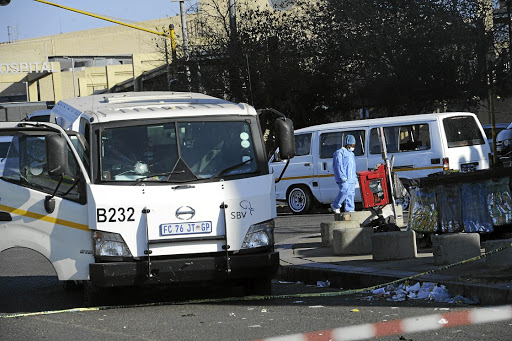 A police forensic officer combs the scene for evidence at Bara taxi rank after robbers attacked a cash van that was loading ATMs in the area and stole an undisclosed amount of money. /Veli Nhlapo

A street vendor who witnessed yesterday's brazen cash-in-transit heist in Soweto has told of how he hid under the table to avoid being caught in the crossfire.

At least two bystanders were shot and injured at the Bara taxi rank when an unknown number of armed robbers exchanged fire with a SBV cash van guards yesterday morning.

The guards were dropping off money at nearby ATMs when they were ambushed by robbers, apparently travelling in four different cars.

She said none of the SBV guards were injured.

Two innocent bystanders were shot and injured during a cash-in-transit heist near the Bara taxi rank in Soweto on Monday afternoon‚ police said.
News
2 years ago

"However, a team of experts have been assigned on a 72-hour manhunt (of the robbers)," Mathe added.

Several of Diepkloof residents' parameter walls were riddled with bullet holes and were declared crime scene following the tense stand off between robbers and guards.

The incident, according to eyewitnesses, happened around 11am in one of the busiest road in Soweto.

Eyewitnesses told Sowetan the shootout started between the taxi rank and the Chicken Licken outlet opposite the entrance to Chris Baragwanath Academic Hospital.

Cartridges scattered around the scene bore testimony to intense exchange of fire.

A street vendor, who did not want to be named, said he witnessed the shootout between the SBV guards and the robbers.

Alleged baby snatcher Kereleng Ramoisa's decision to request bail was hampered on Friday‚ in part because of a power failure at the Protea ...
News
2 years ago

"I was making fire to braai meat for my customers. I suddenly heard gunshots from across the road and I ran for cover," he said.

The vendor said the shots came from the direction of the Chicken Licken outlet, which is located on the upper level at a shopping centre opposite his kiosk.

"I saw two armed men on the ground crossing the road and running to a stationery money truck that came to deliver cash at the ATM machines and they started shooting with four others from inside the rank who ran towards the guards who were pushing the money bags," he recalled.

The vendor said the men approached the guards who were pushing trolleys with money bags.

"The men were trying to wrestle the bags from the guards who were fighting back until they were overpowered and the bags were dragged into a greyish BMW vehicle and a Toyota Fortuner that later fled the scene," he said.

An employee at Chicken Licken said she had noticed two men walking into the shop a few minutes before the heist.

A Soweto woman who allegedly kidnapped a baby at Chris Hani Baragwanath hospital last week wants to plead guilty to the charge.
News
2 years ago

"I was serving customers and they made as if they were looking at the menu. All of a sudden they started shooting right through our glass window; everyone ran for their lives," said the woman.

She also said this was the second such at the same centre in less that a month.

"Last month, a cash-in-transit heist almost claimed a life of a hawker after a failed attempt to rob a money truck. This place is a hotspot for heists," she said.

The woman said there were thousands of people flocking into the centre everyday, causing congestion and traffic gridlock during visiting hours at the hospital.

Lydia Mbele, who tripped and fell with her baby on her back while running from the shootout, said it all felt like a movie. "I had never seen such a thing before. The robbers cleaned out the cash truck in less than five minutes."

Mbhele said she sustained minor injuries on her knees.