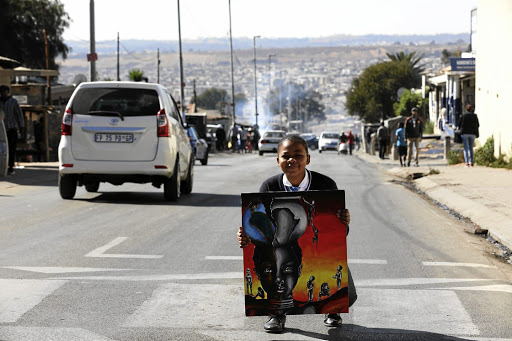 Boipelo Rakau poses on an Alexandra street with one of her famous paintings. /Mduduzi Ndzingi

Boipelo Rakau is telling stories of poverty and crime in her area through her acrylic art paintings.

The 17-year-old grade 12 pupil at Alexandra High School draws her inspiration from her surroundings.

One of her paintings that has captured the hearts of South Africans shows a woman who is carrying a broken calabash on her head with children falling off it.

"In most families children go to bed on empty stomachs. They end up being involved in criminal acts, because of the circumstances at home.

"In the picture, the woman depicts Mother Nature as she is the one who suffers the most when she can't provide for her children. In Alexandra township you see a lot of youth in street corners, smoking nyaope (street drug) which results in them committing crimes," she said.

Rakau is the eldest of five siblings and they survive on her mother's salary.

She lives with her uncle and younger brother in Alexandra so as to be closer to school.

Her love for painting started from a young age when she used to draw on muddy soil after the rainfall.

"I then used oil pastels, charcoal and a pencil, but still the paintings did not bring out with what I wanted to achieve. I recently started using acrylics and pastels. It takes me about three days to finish one painting," she said.

Rakau, who is one of the top performing pupils in her school, was early this year awarded with a Vincent Shabalala award where she received a cash prize of R2,000.

The awards are for Alexandra pupils who are doing well at their schools. She used the money to buy her painting material.

"There are many artists out there, but I learnt that one needs to be different from others. One's art work should provoke people's mind and make a difference in one's life," Rakau said.

Her art teacher Lihle Nene said Rakau was one of his best performing pupils.

"I know in the previous term she only received distinctions for her examinations. She draws about what she observes in her community and I must she is truly talented," Nene said.