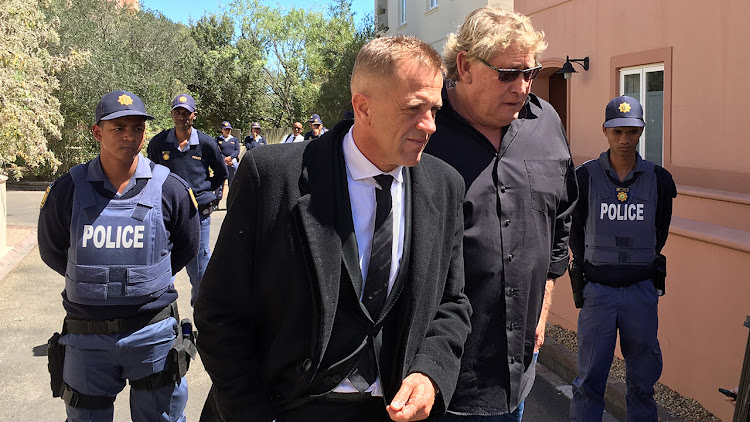 The suspected middleman in the murder of Cape Town lawyer Pete Mihalik called the investigating officer in the case a liar and accused him of perjury during a bail application on Monday.

In his statement read out by his lawyer Jannie Kruger, Vuyile Maliti laid into detective Lt- Col Charl Kinnear’s founding affidavit, claiming it was filled with inaccuracies and that he was “grasping at straws” to link him to the murder.

Maliti made claims of several coincidences which laid the foundation for the state’s case against him, including that his VW Polo was stopped by a traffic cop, along with a Renault Clio driven by his co-accused, after they sped away from the crime scene in Green Point on the morning of October 30.

It is alleged that Maliti, along with his co-accused Sizwe Biyela and Nkosinathi Khumalo, had staked out Mihalik’s movements when he dropped off his children at Reddam House Primary School in Greenpoint the day before he was murdered.

Zimbabwean artists gunned down dropping off friends in Cape Town

A 33-year-old Zimbabwean cameraman and producer was shot and killed in Lentegeur, Western Cape, on Wednesday night.
News
3 years ago

Kinnear also alleges that after their arrest Biyela and Khumalo fingered Maliti, and an unknown “light-complexioned Xhosa man” as their accomplices and that Khumalo even stayed at Maliti’s parent’s home in Khayelitsha after coming to Cape Town from KwaZulu-Natal to carry out the murder.

Maliti denied this, saying that Khumalo would not be able to point out his parents’ home to the police.

He said the fact that both his rented VW Polo and the other alleged getaway car, the Renault Clio, were stopped together by a traffic official less than a kilometre from where the murder happened came down to a “coincidence”.

“Due to the fact that the traffic officer could remember that he stopped a silver-grey Polo with my correct particulars created the foundation of a suspicion and speculation that I was involved in the murder of advocate Mihalik,” he said in the affidavit.

It is alleged that while the traffic officer was writing out a ticket for one of the suspects Maliti approached him from the other getaway car and offered him a bribe, which he refused to take.

Video footage from traffic cameras shows both vehicles driving in the area on the day before the murder happened and Maliti admitted that he drove the Polo on both days.

He also attacked the state’s allegations that he had used a certain cellphone number to call Biyela, claiming that he hadn’t used that number in two years.

The Western Cape education department says gangsterism and an “under-resourced” police force are at the heart a spate of violence in schools across ...
News
3 years ago

He said that he gave the old number when he was issued with a fine by the traffic official who pulled them over because it was the only number he could remember at the time.

“The cell number I supplied is an old number which I used approximately two years ago. I did supply this number as it was the only number I could remember at the time,” he said.

He said the phone and SIM card were confiscated two years ago, apparently in relation to another motor vehicle theft case in which he is implicated and was held as evidence with the SAPS in Strand.

“The investigating officer further states … that he has established that I used (the cellphone number) on the 29th and the 30th of October 2018. This is a blatant lie. He is committing perjury and misleading the Honourable Court,” read the statement.

Maliti said that when he heard that he was being sought by police for Mihalik’s murder he decided to get a lawyer and hand himself over.

Gangsters who terrorised Gauteng and Mpumalanga jailed for 914 years

The Johannesburg high court has sentenced a gang who "terrorised Mpumalanga and Gauteng" to life imprisonment for attempted murder‚ 11 bank ...
News
3 years ago

“From experience I realised that I most probably will be arrested and subjected to police brutality and decided to call a lawyer,” he said.

He said that he tried hiring the services of his lawyer in his car theft matter, Bruce Hendricks, but that Hendricks refused to accept his instruction because “he knew the deceased well”.

He could not find another lawyer in Cape Town willing to represent him and he said that he went to Johannesburg instead, and ended up with the services of BDK attorneys, one of the top law firms in the country.

Kruger, a former director of the law firm, arranged on November 5 for his client’s handover two days later, a fact Maliti believed should count in his favour when a bail decision is made.

The case was postponed to July 29 for judgement on the bail application.