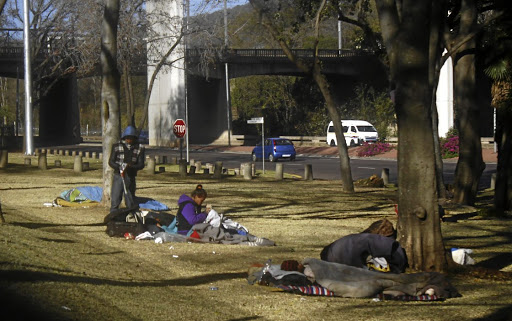 Homeless people are living in fear in the streets of Pretoria. A serial killer has already claimed the lives of five homeless people spreading fear.
Image: KABELO MOKOENA

Homeless people have fled the Muckleneuk area near Pretoria central after the murders of five men over the past three weeks.

When Sowetan visited the plush suburb at the weekend, only a handful of homeless people could be seen wandering outside the Magnolia Park where two bodies were found on June 8 and 9.

According to the coordinator of Kopano Manyano, an NGO for homelessness and drug and substance abuse, most homeless people left the area for other parts of the city.

"They fear for their safety. They now sleep on the outskirts of Muckleneuk [towards] Pretoria station with other homeless people because they feel safer in numbers," said Tebogo Mpufane, Kopano's coordinator and a former homeless person.

"Some of the homeless are addicted to drugs and that's what helps [them cope] while the ones you find in the parks are more likely to be addicted to alcohol, which keeps them warm and helps them sleep."

Police have increased patrols in the area following the killings. No arrests have been made. Spokesperson Brigadier Mathapelo Peters said investigations were continuing.

The slain were all male, middle-aged, homeless and killed at night. They were all stabbed and bludgeoned.

A police source close to the investigation said they did not have witnesses.

"We are working hard on trying to solve these cases but it's difficult because we are still going through some CCTV footage," said the source.

"We've been interviewing homeless persons to see if we can get some form of a lead."

Teboho Mokote, who had been sleeping in the Muckleneuk area for about four years, said he now sleeps with others under a bridge on Nelson Mandela Drive.

"We are all scared because we don't know who is killing us. We have decided to move because there is no security for us. Police don't care about us. The municipality does not care about us," Mokote said.

Bongani Mathebula said everyone in their group was obsessed with their safety after hearing about the deaths.

"It's all we mostly talk about before sleeping. We sleep with one eye open," he said.