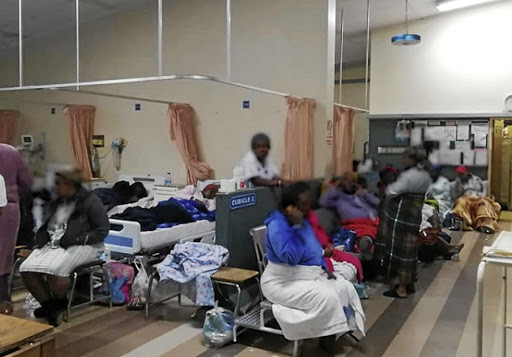 The Tembisa Hospital maternity ward had two nurses for 96 pregnant women at a time.

A 38-year-old pregnant woman has told of how she slept on the cold floor at a maternity ward of a Gauteng hospital after she did not get a bed.

This harrowing experience on Wednesday night at the Tembisa Regional Hospital was apparently as a result of overcrowding.

The situation at the hospital came to light after a frustrated nurse posted pictures on Facebook, claiming that 96 patients were crammed in a ward meant for 51 people with only two midwives on duty.

Hospital management disputed the numbers, saying the nurse had exaggerated the problem. Yesterday, the pregnant mother, who asked not to be named, said she had to place a shawl on the floor and slept on it on Wednesday night.

"They told us that there were no enough beds. Imagine being pregnant and having to sleep on the floor," the woman said. Nine-month-pregnant Mapule Mokgosi said she also slept on the floor after being admitted at the hospital on Tuesday.

"I only got a bed today (yesterday). When I got here it was full and they told us that they don't have enough beds," Mokgosi said.

The maternity ward at the Tembisa Hospital has turned into a nightmare with two midwives having to look after 96 pregnant women at a time.
News
2 years ago

She said the situation was so bad that some people slept on the benches.

"I'm glad that this was exposed on Facebook. What is happening here is not right," Mokgosi said.

According a Facebook post by the staff member which had been shared more than 500 times, the situation at ward 13 was chaotic.

"That means we are having more than 40 patients on the bench. They will sleep there regardless of their conditions," the nurse said.

Another staff member, who asked not to be named for fear of being victimised, said working at the ward was "hell".

The woman said one operational manager, three midwives and three enrolled nurses were on duty that day, however, the situation worsened when one of the midwives had to go home because she was feeling unwell.

She said the operational managers requested for one midwife to go to theatre, leaving only one nurse in charge of more than 90 patients.

"Imagine taking care of all those patients alone. It is frustrating. You can't multiply yourself. These women dilate at different times. I know a colleague who had to catch a baby with her bare hands because a woman was giving birth on a bench," she said.

Another nurse said their complaints to management had fallen on deaf ears. The nurse said the ward was initially meant for 40 patients because each cubicle is designed to cater for 10 people.

She said they had to squeeze in 11 more beds in order to accommodate more people which turned the ward into a 51-bed unit.

However, clinical manager for mother and child at the hospital Dr Relebohile Ncha disputed the claims, saying there were only 80 patients in the ward during the shift in question.

Ncha said midwives working in each cubicle were supported by an enrolled nurse.

"This issue that we had only two nurses is not correct."

Ncha said overcrowding at the hospital was an ongoing problem because they have a big catchment area. She said management was working to find long-term solution.