Image: Supplied Thabisa Xhelithole says she is 'overwhelmed' by the support she received from twitter users in her time of need.

When Thabisa Xhelithole's electricity meter ran dry, she desperately appealed on social media for help keeping the lights on.

She could never have expected thousands of rands worth of electricity vouchers would be sent to her by Twitter users around the country.

The cash-strapped 33-year-old single mother of two from Cape Town tweeted a photo of her empty electricity meter, and shortly afterwards saw her tweet begin circulating and garnering the attention of people wanting to lend a hand.

"That day was Sunday morning and I didn't have electricity because I was out of money. My salary is less than R4,000 a month," she said.

"In the location, R10 will last you a day. I appealed to community and my neighbours but I was worried to go around asking because I didn't know how they would look at me," she said.

The meter did not go down but went up & I managed to pay half of this year's fees from what I owe for my son.

Thank you for your blessings, tommorow morning I have been invited to appear on morning live SABC 2

I am nervous my English bundles will deplete on air. pic.twitter.com/dD3oOg9lQJ

"I was worried that I couldn't cook them porridge," she said of her two children. "My boy was sitting looking at me, waiting. I couldn't take care of my babies."

But having joined Twitter a few months prior, she considered the idea that the world at large might be of assistance.

"Twitter isn't going to judge me," she recalls thinking.

Users of the social media platform began sending through electricity vouchers, and they didn't stop there.

They also sent her money to pay for her son's school fees and donated clothes that she is going to fetch from a collection point.

She said that the donations have been coming in from beyond SA, and that she has received electricity bundles and e-wallet parcels from as far as the US and Canada.

She has now gained a Twitter following of more than 3,000 people and has been interviewed on SABC 2.

I will keep everyone posted with the extra miles that I was also blessed.

May God bless you all pic.twitter.com/nI5CWpRuyb

She said that although the outpouring of support has more than met her electricity needs, vouchers continue to come through.

"I don't know how to thank these people - they helped me a lot," Xhelithole said.

She said that her job at a homeware store - where she has been working since 2006 - is not paying the bills, and she hopes that she can complete her on-the-job training programme and be given a raise.

"I'm so glad that I won't have to worry about the school fees and electricity now this year," she said.

"I will now be able to try to make more money so that we won't need everyone's help again." 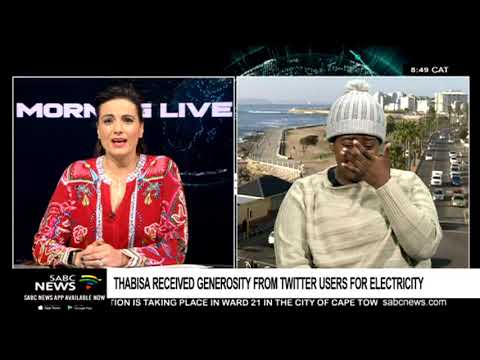