Man recalls how ex burnt his car outside police station 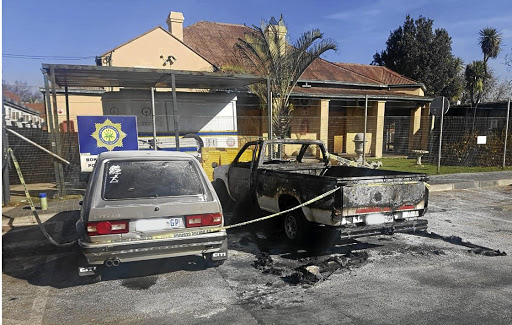 A bakkie belonging to Sylvester Masimo was torched allegedly by a spurned woman on Sunday.
Image: Supplied

The owner of a car that was burnt outside a police station, allegedly by his ex-lover, has spoken out about the events that led up to the incident.

The man from Boksburg, on the East Rand, said he was devastated by the incident, saying he drove the woman with whom he had broken up a year ago to the police station with the hope that police would help him.

Sylvester Masimo, 44, said he had not seen the woman since last year after he broke up with her and took out a protection order against her for being abusive.

"She was abusive and very dramatic. She has beaten me up, hit me with bottles and threw hot water over me ... so I could no longer stand the abuse and drama."

Audrey Kagande, 47, who was arrested on Sunday, allegedly set Masimo's bakkie alight at the Boksburg North police station after he refused to take her back.

Thomas Mabelane was lucky to escape with a minor injury to his face after his side chick of 15 months attacked him during a lovers' tiff last week.
News
3 years ago

"She had been calling me the whole week, threatening to come to my place and break everything, but I told her not to come because I am now married."

He said his wife is in Zimbabwe. Nevertheless, the woman forcefully went to his place demanding that he take her back. Masimo then drove to the station for help. He said while he was inside the station explaining to the police about what was happening, he heard somebody shouting that a car was burning outside.

"I ran there with everyone else, only to find that it was my car that was on fire. A man who saw the woman walking away after torching the vehicle alerted the police and they gave chase. She was arrested two streets away," he said.

Masimo said he used the bakkie to make extra cash when he was off from work.

Const Justice Ramaube said Kagande has been charged with malicious damage to property and was on Tuesday remanded in custody.

A 47- year -old woman has been arrested for burning her ex-boyfriend’s car at a police station.
News
3 years ago
Next Article