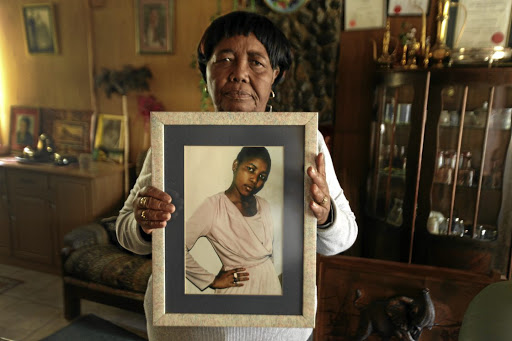 Grieving mother Sizakele Simelane with a portrait of her daughter Nokuthula, in Bethal, Mpumalanga. /KEVIN SUTHERLAND

Nokuthula Simelane's family is getting ready to find out the truth behind her disappearance 36 years ago.

The trial of four former apartheid security branch officers implicated in Simelane's disappearance is set to start in the North Gauteng High Court in Pretoria on August 8.

Simelane's sister Thembi Simelane-Nkadimeng spoke to Sowetan this week about the family's apprehension ahead of the trail.

"It is tough; it is painful, but the ultimate closure that we are seeking is worth the sweat and tears. As a family, we applied for the order which clearly explains the last days of Nokuthula's life," said Simelane-Nkadimeng.

"Our view, which is supported by the work of our private investigator Frank Dutton, is that she was captured by the special branch police officers, held captive for about six to eight weeks, brutally tortured and subsequently killed.

"My sister has been missing for more than 36 years now. The road to prosecution has been a long and painful one.

"My family was forced to take matters into its own hands by conducting its own investigations for years, to push for a legal action."

According to Truth and Reconciliation Commission (TRC) records, Simelane, who was a member of Umkhonto weSizwe, was tortured on a farm in the North West in 1983. She has not been seen since then.

State owes it to Neil Aggett's family to get to bottom of his death, says justice minister

Justice minister Michael Masutha says the state is committed to ensuring that perpetrators of apartheid-era crimes who were not granted amnesty by ...
News
2 years ago

They were each released on R5,000 bail after their previous appearance.

Coetzee, a former special branch operative who was one of Simelane's torturers, told the TRC that he believed she was killed by her fellow comrades upon her return from Swaziland after being detained for five weeks.

However, according to reports, Simelane was allegedly shot and murdered by the police.

Simelane-Nkadimeng said the ANC has been helpful in assisting the family to gather evidence and submitting statements which were needed by investigators.

A police docket was opened in 1996 according to the South African Litigation Centre which is helping the Simelane family. The centre, however, said in a statement in 2001 the amnesty committee of the TRC granted some of the perpetrators amnesty for Nokuthula's abduction, including certain police officers who the committee found had lied about the brutal torture.

This was notwithstanding the full disclosure requirement laid down in the TRC law. None of the perpetrators applied for amnesty for her murder.

"There are days when my body just can't take it anymore. Sitting next to my emotional mother during court proceedings is going to be draining in ways you cannot imagine," she said.

"I have seen the pain from her eyes when my father died, not knowing what happened to their daughter. You can imagine the burden that my mother has, because every time she speaks about this she says 'may I also not die without having laid my daughter's remains to rest'."

Sergeant Joao “Jan” Rodriguez was today expected to be charged with the murder of Timol.
News
3 years ago

"The judgment is confirmation that the three accused of Simelane’s murder were not on a private frolic of their own but were part of the apartheid ...
News
3 years ago

Simelane-Nkadimeng, who was recently elected as SA Local Government Association (Salga) president, said she was preparing to take time off as mayor of Polokwane during the trial of the men accused of her sister's killing.

"It is pursuit of peace of mind that we would have done everything humanely possible to lay her soul and remains, if found, to rest.

"It is the lesson to my children that one does not give up on family. But most importantly to all South Africans, it is making sure that we hold our democracy accountable to its mandate of justice to all."

Simelane-Nkadimeng said Nokuthula's case is but one example of hundreds of other cases that have been similarly neglected.

"There are many other cases for which perpetrators have been denied amnesty or failed to apply for amnesty... Although Nokuthula's case is not a class action on behalf of all victims of outstanding TRC cases, this case is representative of all such incidents where victims remain without closure for crimes that happened decades ago," she said.

"This case is also indicative of the almost total disregard by the South African government for the recommendations made by the TRC. To date, very few perpetrators of apartheid-era crimes have been held accountable before the courts.

"This is despite the TRC handing over approximately 500 missing person cases and 300 other cases for possible prosecution to the NPA, following the completion of the amnesty committee's work.

"The delays in prosecutions deny
victims an important form of reparation -
accountability."