Cops to be assigned to Gauteng schools 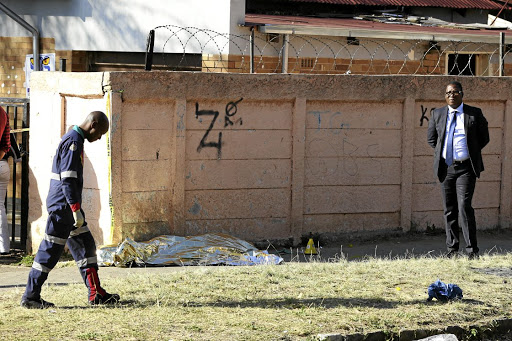 MEC Panyaza Lesufi stands next to the body of Daniel Bakwela, a pupil who was stabbed to death in a fight with a schoolmate. /Thapelo Morebudi

Each public school in Gauteng will be assigned with one police officer that the school can call on whenever there is a problem.

This was revealed by Gauteng education MEC Panyaza Lesufi when he outlined his plans for the provincial education.

"A police will be allocated to a school in an event a school needs police, then the said officer will assist accordingly.

"We are also working with mobile companies so that when one presses number nine on their cellphone and holds it for more than 30 seconds it will ring to the nearest police station, alerting the police identified to work with that particular problem," Lesufi said.

In the last few months, Gauteng has experienced a surge of violence at public schools.

Undercover cops will be deployed to Forest High School, where a pupil was murdered, to prevent crime activities happening at the institution.
News
2 years ago

Despite Lesufi's explanation that the officers would be on standby at their stations, Dlamini said: "Police can't be assigned to stay at schools. The department must employ security guards."

Recently, grade 10 pupil Daniel Bakwela of Forest High in Johannesburg was stabbed to death outside the school, allegedly by a schoolmate. Mohamed Mwela is out on R5,000 bail. While in another incident, a grade 10 pupil at Oosrand in Boksburg missed his mid-year examinations when he was attacked by four pupils who accused him of being a "cheeseboy", meaning a smart aleck or pampered kid, depending on the situation. The 17-year-old lost his tooth in the process.

Media must report school killings in a fair, open way

Has the name of the school that this 13-year-old suspect and the other two boys attended been identified and given lots of publicity? If not, why?
Opinion
2 years ago

Education spokesperson Elijah Mhlanga said most of the violence happens outside the schools: "These are not random acts of violence, the origins of the problems are out there in the streets of society. The solutions are not with the department, but with the people themselves, the police, the justice system and all other stakeholders. The streets around the schools are battlegrounds."

Anele Siswana, clinical psychologist, said: "The concept of broken families is one of the potential that often contributes to problematic behaviour. Learners that come from broken families where there's lack of discipline may display different kinds of problems."