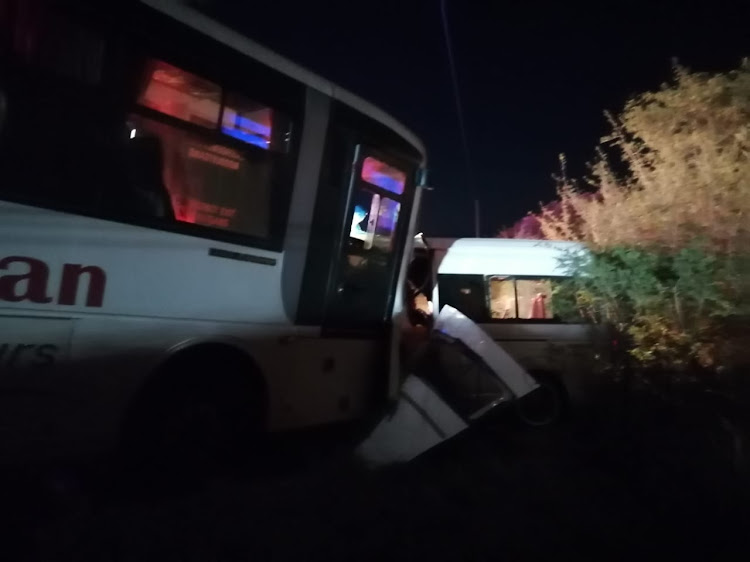 Twenty-four people died in a crash on the R81 in Limpopo late on Sunday evening.
Image: Supplied/SAPS

"This was the bloodiest weekend we have experienced and it again points to recklessness and negligence by drivers."

These were the words of Road Traffic Management Corporation (RTMC) CEO Makhosini Msibi on Monday in response to a spate of accidents over the long weekend in which at least 38 people died in just two of the country's provinces - Limpopo and Mpumalanga.

Twenty-four people, travelling in a taxi, died in a crash on the R81 in Limpopo on Sunday at about 10pm.

Police spokesperson Colonel Moatshe Ngoepe said in a statement that the crash happened between Mooketsi and Giyani.

"It is alleged that a bus and a [Toyota] Quantum which were traveling in opposite directions collided head-on. The bus was coming from Giyani towards Mooketsi and the Quantum was coming from Mooketsi towards Giyani," Ngoepe said.

"During this fatal crash, 24 passengers in the Quantum died instantly and one sustained serious injuries and he was taken to the hospital for medical treatment."

One passenger in the Quantum, the bus driver and two bus passengers sustained serious injuries. Police have opened a case of culpable homicide.

RTMC spokesperson Simon Zwane said they would investigate whether the minibus was overloaded.

Six people died in another crash on the same stretch of road at Dingamanzi Village, between Giyani and Polokwane, in the early hours of Sunday morning when two cars collided.

Two people were also killed and 81 others injured in an accident involving an articulated bus, bakkie and SUV on the R71 Phalaborwa-Giyani road between Letsitele and Gravelotte in Limpopo on Saturday morning, paramedics said.

In yet another crash, six people died on the R544 between Emalahleni and Verena in Mpumalanga when two cars collided.

Traffic is expected to increase on Monday afternoon as motorists return home after the long weekend.