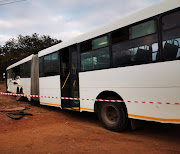 Image: Supplied by ER24 More than 80 people were injured in an accident between a bus, bakkie and SUV in Limpopo on Saturday morning.

More than 80 people were injured in an accident involving an articulated bus, bakkie and SUV on the R71 Phalaborwa-Giyani road between Letsitele and Gravelotte in Limpopo on Saturday morning, paramedics said.

“Shortly after 5.30am, paramedics from ER24 and various rescue services, including disaster management, arrived on the scene. Multiple patients were found sitting and lying near the bus. A bakkie was found wedged completely under the front of the bus and a third vehicle was found a few metres away.

“Paramedics established an incident command system and triaged the various patients on scene. 80 people were found with minor injuries on the scene. One person was found with a severe injury to his hand.

“Paramedics were able to visualise an occupant trapped in the bakkie under the bus but are unable to gain access to the victim. Heavy duty rescue services were called to the scene to lift the bus from the bakkie. Due to the mechanism it is believed that the occupant has succumbed to their injuries. Further assessments will be conducted once the bus has been lifted from the bakkie,” Vermaak said.

He said the exact circumstances surrounding the collision were not yet known. Various local authorities were on the scene.