Father who flung baby off roof convicted of child abuse 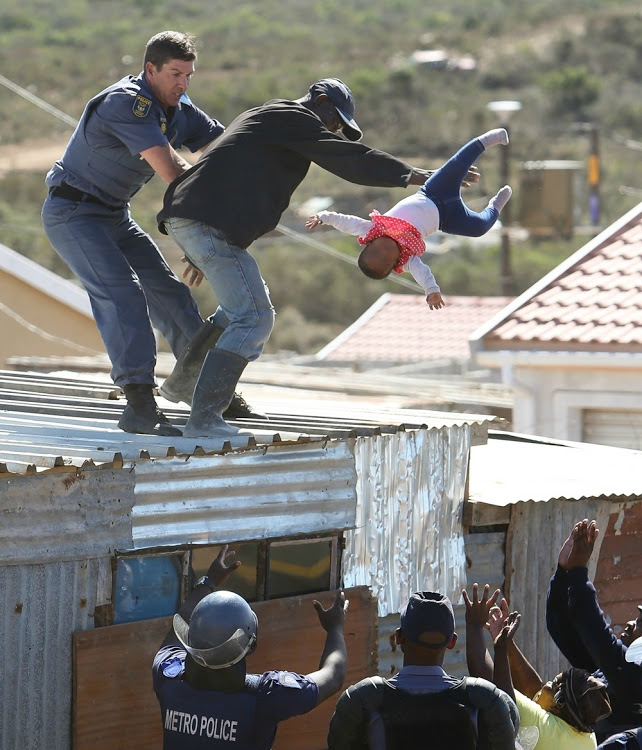 The father who flung his child from the roof of a shack has been convicted
Image: Werner Hills

The 38-year-old Port Elizabeth father who flung his one-year-old baby off a shack roof during a protest has been convicted of child abuse.

The man‚ who is not being named to protect the child’s identity‚ was arrested in April 2018.

His arrest made headlines across the country after video footage and pictures emerged of him standing on the shack roof‚ surrounded by police‚ before throwing the child.

In the New Brighton Magistrate's Court on Wednesday‚ the father pleaded guilty to child abuse after the state dropped charges of attempted murder. He received a suspended sentence.

Police spokesperson Capt Andre Beetge said the man was fined R5‚000 or one year in jail‚ suspended for five years.

The man was arrested during a protest in the Joe Slovo informal settlement‚ where the demolition of illegally erected shacks on municipal land was under way.

The father climbed on to his shack in an attempt to prevent the structure from being destroyed‚ threatening to throw his child off the roof.

A police officer attempted to talk him down‚ but he then threw the child.

The baby was handed back to her 35-year-old mother and social services was asked to provide reports.

Beetge said the child had been returned to the family after social welfare services found no reason for her to be taken away.

The 38-year-old father from Port Elizabeth who flung his baby off a shack roof earlier this month‚ was released on a warning by the New Brighton ...
News
4 years ago
Next Article