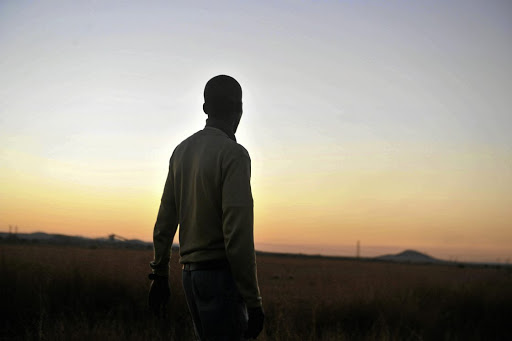 For seven years, Thapelo believed that his son died at birth, until he learnt that he was 'sold' to a friend of a guardian of his then girlfriend and mother of his child. / Veli Nhlapo

A father who for seven years believed his newborn baby died after birth is fighting to have the custody of his son.

Thapelo*, 33, from Rustenburg in the North West learnt with shock three years ago that his son was secretly given to someone else to raise soon after birth.

He is now waging a legal battle in the Rustenburg district children's court sitting in Tlhabane to get his custody rights restored.

The man, an apprenticeship student for a construction company, said after his son was born at Job Tshomankane Hospital in Tlhabane in 2009, his then 17-year-old ex-girlfriend told him the infant died during birth.

The couple were living separately and Thapelo was not present in hospital when his son was born.

But in 2016 it emerged that a woman now aged 60, a family friend of his ex-girlfriend, had been raising his son as hers and also registered him as her biological child with home affairs. This, Thapelo said, was first brought to his attention by a relative of the 60-year-old woman.

Thapelo suspects that money may have changed hands in a secret transaction that only a few people knew about.

Thapelo reported the matter to police in February 2016 after finding out about his child.

The matter was then referred to the children's court.

In a report by a family counsellor and an advocate presented to the court, the mother said she did not know where the child was.

She claimed to have left her son in hospital after birth.

The report stated that the date on the child's birth certificate was wrong, and this was pointed out by the father.

The mother of a baby who was abducted from Chris Hani Baragwanath Academic Hospital last week has expressed shock that her little girl had a price ...
News
3 years ago

The family of the Soweto woman who allegedly abducted a newborn baby wants her to feel the wrath of the law.
News
3 years ago

According to the report, the child's mother fell pregnant while in matric.

The mother told the counsellor that based on her lack of financial support, age and being a pupil, she had plans to terminate her pregnancy.

However, she said a doctor told her the pregnancy was too advanced for an abortion.

She then apparently decided to put her child up for adoption and left him at the hospital without telling the father.

"However, she seemed not to know of or possess any adoption papers or forms she signed. The adoption was not formalised," the report stated.

According to the report, the mother would see the child at family gatherings years later but had no clue the child was hers.

The report recommended that Thapelo be allowed to bond with the child and that the boy be "removed to a temporary safe care in terms of Section 151 (1&2) of the Children's Act."

Thapelo told Sowetan this week that he felt he was being "victimised twice" as he's only allowed to see his son for an hour on Fridays, while the child was still kept with the family that raised him.

"Why are there no criminal investigations because details of my child's biological mother on the birth certificate and the clinic card are not true. Isn't that fraud," asked Thapelo.

"Now, I'm told that everything is done in the best interest of the child. What about my interests and my rights as a father?"

He said social workers kept accusing him of being angry and consistently advised him to deal with his anger.

"I'm not happy with the whole matter because it seems like I am the one in the wrong. Now the magistrate says the next report to be presented will evaluate how I've bonded with the child and if I am serious about building a relationship with my child who was stolen from me," he said.

Thapelo's mother also raised concern about how her son was treated by social workers and the court. "Even if this kid doesn't come to us, my son has to be part of his life. That's his right," she said.

North West health department's spokesperson Tebogo Lekgethwane said department would conduct its own investigations because what has been raised in court papers has "far-reaching implications".

Not his real name. Sowetan has withheld the name to
protect the minor child