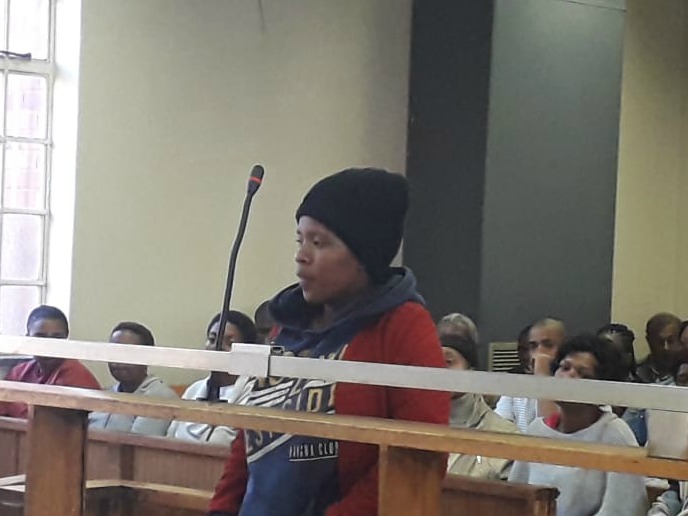 Kereleng Ramoisa dropped her bail application on Wednesday in the matter in which she is accused of abducting a newborn baby from Baragwanath hospital.
Image: Nomahlubi Jordaan/TimesLIVE

A Soweto woman who is accused of kidnapping a baby at Chris Hani Baragwanath Academic Hospital last week wants to plead guilty to the charge.

Kereleng Ramoisa, 27, appeared in the Protea magistrate's court on Wednesday. Her case was postponed to June 21 for her to plead.

The matter was initially set down for a bail application. However, her lawyer Gift Makate told the court that his client intended to plead guilty.

Makate said he needed to consult Ramoisa to get proper instructions.

Dressed in red pants, a blue sweater and a red jersey, Ramoisa looked for her relatives in the gallery.She signalled to a man who nodded back.

Bikokuhle's newborn baby was kidnapped from Chris Baragwanath hospital on June 6, 2019. The newborn was found the following day and was brought home for the first time on June 11, 2019.

The mother of the baby, Bikokuhle Hlatshwayo, told SowetanLIVE on Monday that she gave birth to baby Mpumelelo last Wednesday, but woke up to an empty baby cubicle less than 24 hours later. She said a patient next to her told her that "a lady who claimed to be her mother-in-law came while she was heavily sedated".

The baby was found by police on Friday at a house in Diepkloof, less than 5km away from the hospital, and returned to her mother. It is alleged that the baby was sold to Ramoisa for R2,500.

Speaking outside court on Wednesday, Phindile Monareng, baby Mpumelelo's paternal grandmother, said she discovered that the baby was stolen when she went to visit Hlatshwayo in hospital.

"I had brought her food and stuff for the baby, but when I got there Bikokuhle told me that my first grandchild was stolen."

The mother of a baby who was abducted from Chris Hani Baragwanath Academic Hospital last week has expressed shock that her little girl had a price ...
News
3 years ago

"The hospital staff need to account for this. There must be a syndicate behind this. How can someone leave the hospital with a baby without being signed out?," said Monareng.

She said CCTV footage showed Ramoisa carrying the baby in a paper bag.

"What baffles me is that she [Ramoisa] went past so many wards with the baby."

She said hospital staff had told them on Tuesday that security would be tightened at the hospital and that women would not be allowed into the antenatal ward.