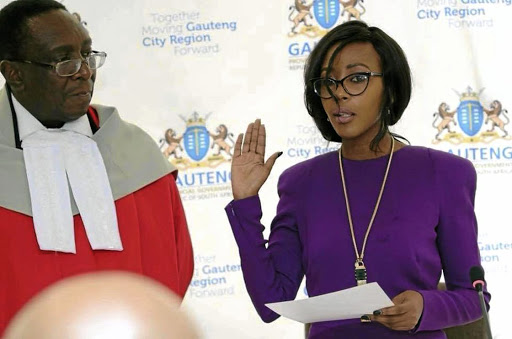 Mbali Hlophe takes the oath of office as MEC for sports, arts culture and recreation in Gauteng.

Mbali Hlophe is among a crop of leaders who are expected to bring youthful exuberance into the Gauteng government.

Hlophe, 36, is one of the fresh faces in the provincial executive appointed by premier David Makhura as part of the ANC's drive to bridge the gender divide and shore up the generational mix in the government.

Days after her appointment as the MEC for sport, arts, culture and recreation, Hlophe opened up to Sowetan about her plans to transform society through sport and the arts.

Hlophe has her sights set on helping artists who perform on the streets into the mainstream performing arts arena. She said it was her top priority.

"They are treated as invisible people. Society has normalised this. You walk past them and you don't even recognise they [artists] are there," Hlophe said.

"These young people are talented. They are literally raising their hands, saying 'look at me, I am talented'. The department must go and reach out to these young people.

"We should not focus on those youths who are already within organised structures. We must reach out to the ones on the street before we lose them completely. 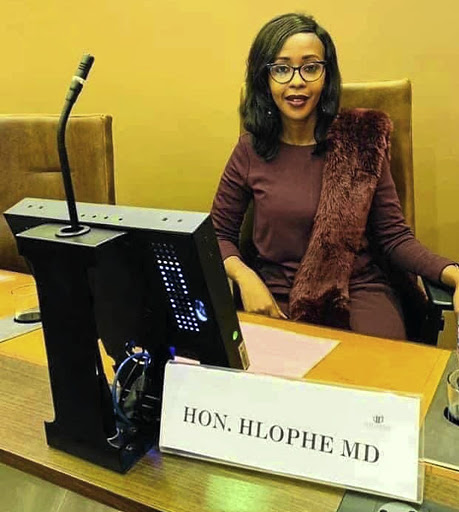 "Once a person is on the streets, then they become vulnerable to drugs and alcohol.

"The first step will be to partner with social development and find shelter for the artists that do not have a place to stay.

"Every month there is something that the department is doing. We want to create a platform for them to showcase their talent.

"In that way, we'll be able to pay them for performances. We want to create a sustainable income for them."

Born in Pimville, Soweto, Hlophe's early days into politics and activism were mainly influenced by her parents, Mary and Joseph Hlophe.

Her father was a priest in the Old Apostolic Church. Seeing her father serve his community shaped Hlophe's desire to do the same.

"It almost became second nature that I would be involved in something that enables me to serve people," she said.

She spent her high school years at Parktown Girls and finished matric in 2002.

But Hlophe harboured ambitions of working in the built environment, focusing in design and architecture.

It came as no surprise when she pursued architectural studies at the University of Witwatersrand.

It was at Wits where her political career blossomed, and later she became the president of the student representative council.

Former president Kgalema Motlanthe has warned public officials occupying positions of power to hold themselves to a higher standard of ethics and ...
News
2 years ago

It was also at Wits that she led a protest against fee increases, leading to her arrest.

"It was a big thing for us because a lot of students who do not come from privileged backgrounds were being excluded," she explained.

"As the SRC, we had to speak on their behalf. It did not make sense for the institution to increase fees beyond what people could afford."

In her third year, Hlophe changed from architecture to developmental studies.

"It became a natural transition because developmental studies is broader. In architecture you design for the elite and the privileged," she said.

Hlophe served in the executive committee of the ANC Youth League in Gauteng for two terms and was also a provincial spokesperson.

She views sport, arts and culture as tools to building social cohesion in society.

"You are able to combine different individuals irrespective of their class and put them on a platform where they can compete fairly. Sport cuts across barriers of discrimination in any social setting," she added.

Her new portfolio, she said, was not just about arts and sport, but also about providing a way for the youth to use their natural talent and prevent them from "negative activities".

Young people seeking employment should look at other innovative ways of being absorbed into the work environment rather than relying on government ...
News
2 years ago

Hlophe said her department would continue to build the controversial combi courts (sporting courts catering for more than one sporting codes) as these helped provide facilities for different sports.

Her predecessor, Faith Mazibuko, was recorded lambasting her senior managers for failing to deliver combi courts - purportedly to bolster support for the ANC - ahead of the elections on May 8.

"We may not have rolled them [combi courts] out sufficiently, that is what we have to now look at in this term of office," she said.

Hlophe said the department needed to communicate the work it does effectively.

"There are many soccer clubs and other sporting codes and all they require are kits. Those are the basic things that the department can assist with.

"But people need to know who they can contact. We need to be more visible," she added.