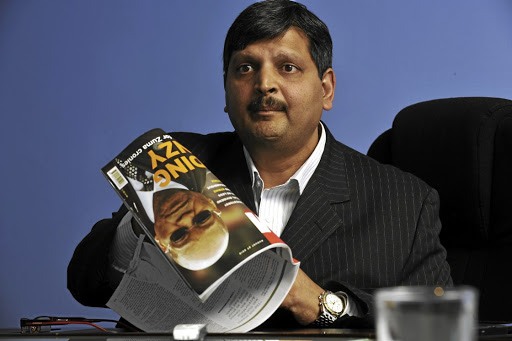 One of the Gupta brothers, Atul.
Image: Robert Tshabalala

The state capture inquiry on Monday heard how the Gupta family allegedly used a letterbox company‚ Homix‚ to illicitly siphon millions of rands in kickbacks to other companies linked to them both in and outside SA.

In his evidence before the commission‚ the Reserve Bank's Elijah Mazibuko detailed a range of transactions that flowed from Homix's accounts to various local and offshore entities‚ like YKA International Trading Company‚ Morningstar International Trade‚ Bapu Trading and Albatime.

These transactions formed part of the Bank's investigation into Homix's accounts between 2014 and 2015‚ when more than R500m moved through the shell company.

Mazibuko said Homix's Standard Bank account remained largely inactive until March 2014‚ when there was a dramatic increase in activity and it received several large deposits totalling about R660m - without any real evidence of work being done.

A similar pattern was discovered in the months after that.

For example‚ in April 2014‚ Homix received about R34m from Neotel. This money was transferred in its entirety to known Gupta-linked entities Ballatore Brands and Bapu Trading.

The family at the centre of state capture allegations in South Africa is planning to throw a lavish wedding for an estimated R43m at a ski resort in ...
News
2 years ago

Mazibuko also claimed the Guptas used money from Homix to finance other business interests. For example‚ the Reserve Bank found that between March 2014 and May 2015‚ Homix paid Regiments Capital about R179m.

Three transactions in the same period‚ totalling about R4.4m‚ were blocked when the suspicious activity was detected.

The Bank started its investigation into Homix after Mercantile Bank reported the suspicious activity.

Mazibuko concluded his evidence by saying that there was a need to ensure that the Reserve Bank and other law enforcement agencies were continuously strengthened with the technology‚ resources and skills needed to combat illicit financial flows.

Gupta-linked firm solicited funding on behalf of Transnet 'without permission'

The role of Transnet's treasury division was "highly diluted" when the state-owned company was negotiating its controversial procurement of 1‚064 ...
News
2 years ago

Transnet lost out on hundreds of millions of rands due to a controversial 2015 decision to swap interest fees on a multibillion-rand loan to finance ...
News
2 years ago
Next Article