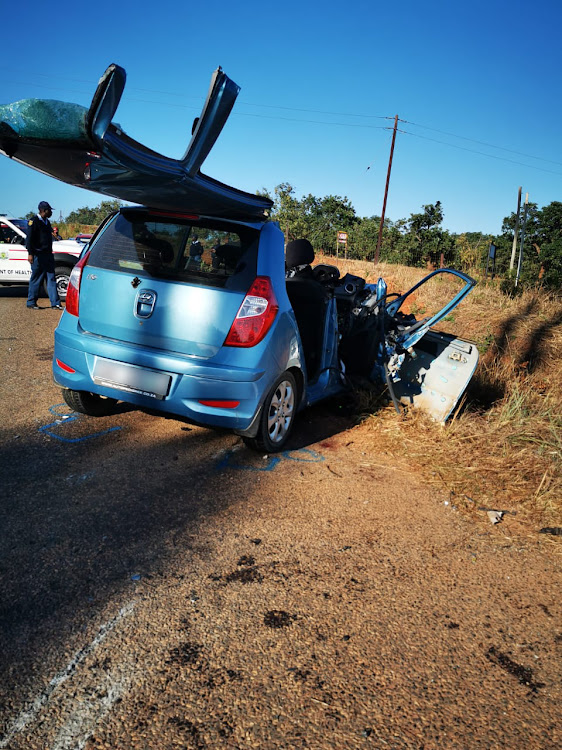 Four people were killed and five others injured in a collision between two vehicles in Tzaneen on Saturday morning.
Image: Supplied by ER24.

Four people were killed and five others injured in a collision between two vehicles on Deerpark Road in Tzaneen in Limpopo on Saturday morning, paramedics said.

ER24 spokesman Russel Meiring said that ER24 personnel had arrived on the scene at 7am to find several other services already in attendance. A light motor vehicle was found parked on the side of the road while a SUV was found in the middle of the road.

“Upon closer inspection, medics found four people lying trapped inside the light motor vehicle. Unfortunately, all four patients had already succumbed to their multiple, fatal injuries. Nothing could be done for them and they were declared dead,” Meiring said.

No permission was given for him to use the vehicle.
News
2 years ago

“Five other patients from the SUV were tended to. Assessments showed that one had sustained critical injuries while four others had sustained injuries ranging from minor to moderate.

“The patients were treated for their injuries and the critically injured provided with advanced life support interventions before they were transported to nearby hospitals for further care,” he said.

Local authorities had to use jaws-of-life equipment to free the deceased from the vehicle, Meiring said.

The minister of transport has expressed sadness after a pupil died when a car crashed into him. Koketso Rahlane, the grade 8 pupil, died while ...
News
1 year ago

A light aircraft crashed in Mookgopong, Limpopo, on Friday, killing a husband and wife on board.
News
1 year ago
Next Article