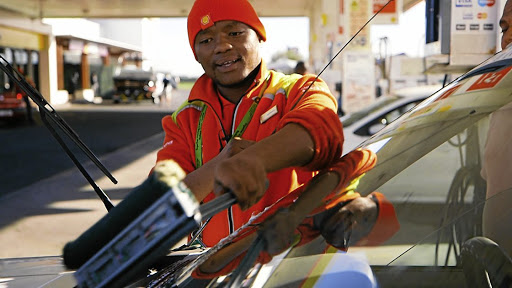 Shell SA is facing a social media backlash over its R500,000 pledge to Nkosikho Mbele to donate to a charity of his choice.

The company made the pledge yesterday after Mbele became an overnight hero for giving a stranded female motorist R100 to fill up her tank.

Mbele's act of kindness has earned him a crowd funding initiative that has since raised almost R500,000 in donations.

Yesterday, however, Shell chairperson Hloniphizwe Mtolo thanked Mbele and pledged to donate R500,000 to a charity of his choice and nominated him for an internal excellence award.

"I've seen the good news and wanted to call and congratulate you for the good work you have done," he told Mbele.

"We have decided to respond to what the public has done and donate half-a-million rand to a charity that you will choose," he said.

"If it comes from your heart, you will be rewarded and I am just so thankful."

This gesture did not go down well with some twitter users.

Shell chair Hloniphizwe Mtolo probably didn’t realise that his announcement of donating R500,000 to a charity of Mtolo’s hero petrol attendant Nkosikho Mbele’s choosing would raise fire. Well, it did and many South Africans aired their frustrations on June 4 2019.

Another user, Akhona Baninzi, said: "dear @Shell he IS the charity. Please do better. Take him to school, invest IN him so he can get a better paying job, better house for his family. How are u helpin him by donating R500,000 to a charity of his choice when he needs the money to better his life & that of his family?"

However, Mbele said yesterday that he "still can't believe it" and was "so grateful" to his bosses for pledging the money to a charity of his choice, which is yet to be decided.

He also poured cold water on speculation that he wasn't being allowed to personally administer his funds.

He confirmed that it was his request to have the funds raised for his family to be administered by BackaBuddy.

"I asked BackaBuddy to keep it for me," he said. "I live in Khayelitsha and it is not safe for me to have it in my account. I have asked them to hold it because there are a lot of people who are going to turn up [looking for money]."

Transport minister Fikile Mbalula "saluted" Shell and posted the video of the Shell chairperson commending one of his most famous employees.

Mbele has been nominated for a "Shell Excellence Award" abroad as a representative of South Africa. He will travel to Zanzibar soon to attend the Shell regional service excellence awards.

Motorist bailed out by a petrol attendant repays her debt

Petrol attendant Nkosikho Mbele doubted that he'd ever see Monet van Deventer again - the motorist whose tank he filled with R100 worth of petrol and ...
News
2 years ago

Inspirational petrol attendant Nkosikho Mbele will spend the R400,000 donated to him so far in a crowdfunding campaign on his two children's ...
News
2 years ago

A crowdfunding campaign for petrol attendant Nkosikho Mbele whose act of kindness warmed hearts across South Africa has raised more than R282,000 to ...
News
2 years ago
Next Article