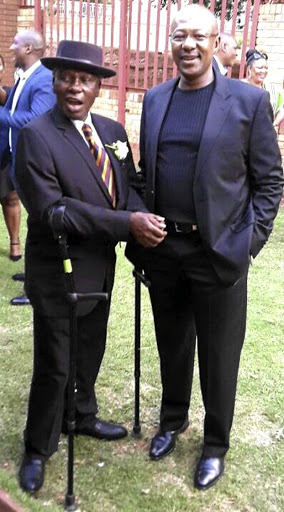 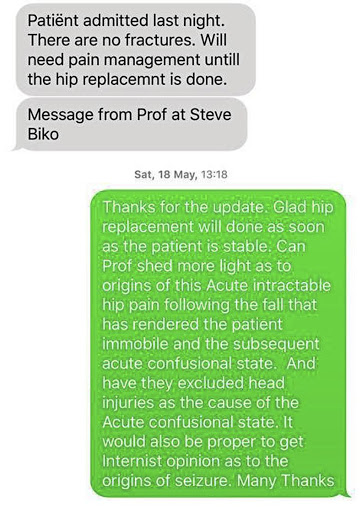 A pensioner has been stuck in hospital for five days after being discharged, as his family refused to fetch him until he has had a hip replacement surgery.

Philemon Mosupye, 73, whose family says he has been on the hip replacement waiting list at Steve Biko Academic Hospital in Pretoria for almost 10 years, was discharged from the facility about a week ago.

But his son Duke Mosupye, a medical doctor, is refusing to fetch him from the hospital, demanding that he be given hip-replacement surgery.

Duke accused the hospital of discharging his father without proper treatment and instead performing a different procedure without the family's consent.

According to Duke, Mosupye, who also suffers from arthritis, was initially scheduled for a hip replacement after undergoing a knee operation; however this was cancelled due to a strike at the hospital about 10 years ago. But his surgery was never rescheduled.

Duke said Mosupye was able to move around with the aid of crutches until he suffered a seizure and injured his already wounded right hip four weeks ago. The injuries sustained caused Mosupye to lose his ability to walk and to suffer intense pain, Duke added.

"Here is a man who is bedridden and in pain. If you give him a hip replacement he will get out of bed and walk. There's no reason for denying him surgery," he said.

He said his family would not fetch Mosupye until the issues are resolved.

"The patient is still in ward 4.4. We will not fetch the patient until the above issues are dealt with. He must get the hip replacement," Duke said.

He said following the seizure, his father also developed acute confusion, hallucinations and struggled to recognise people. He said they repeatedly requested for doctors to assess his father's mental state but this was not done.

Duke said a specialist had informed him last Wednesday that surgery would be the best way to assist his father and free him from pain.

"I made him aware the patient has been waiting for hip replacement for more than 10 years and more than the average waiting time," Duke said.

He said he was shocked when they informed the family that Mosupye would be discharged despite an agreement to discuss the matter further.

Duke said he also discovered that a hip injection procedure was performed on Mosupye on Thursday last week without the family's consent.

"Despite the physiotherapist assessment they went ahead and discharged the patient and we were told the decision is final and that the patient must be taken to a hospice. Question now is, what went wrong with the unauthorised procedure to make the patient who was eligible for surgery in the past 24 hours to become a hospice candidate?" he asked.

The hospital's CEO Dr Mathabo Mathebula yesterday denied that Mosupye had been on the waiting list for 10 years.

"I learnt that the family refuses to collect their discharged father. He came for a second opinion after having had false allegations made by the family members against Kalafong Provincial Hospital. The hospital will continue engaging the family to find an amicable solution, so the patient can be discharged accordingly," she said.

Mathebula said efforts had been made to explain to Duke that his father was not a viable candidate for a hip replacement due to other medical conditions that she could not divulge. "Hip replacement is a non-emergency procedure. He was on the waiting list like all other patients and he is in actual fact inoperable and that has been communicated to his son," she said.

Mathebula said the case had been reported to social workers. "A case of neglecting their elderly father is being investigated by social workers. The patient will be taken home and the family will be dealt with by legislation," she said.

Mathebula said there were 600 people on the hospital's hip-replacement waiting list due to a growing demand for the service.