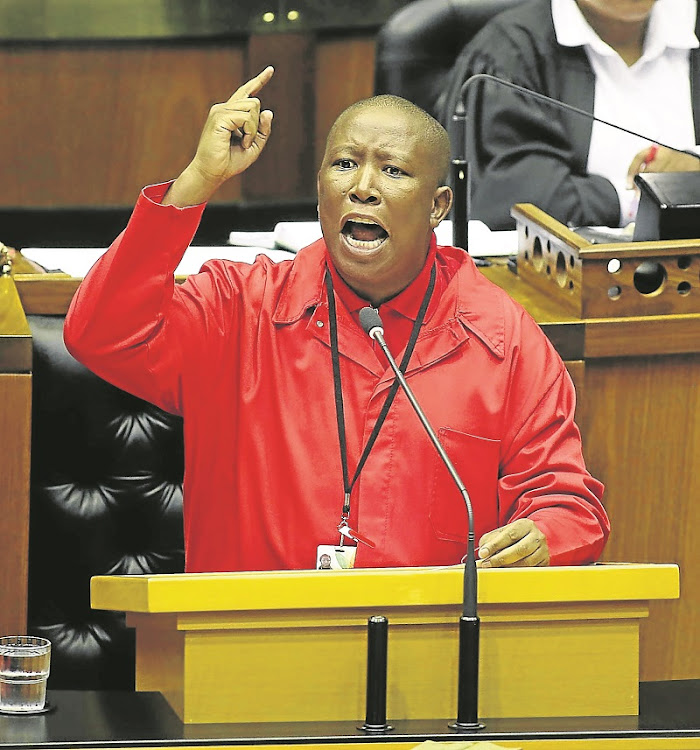 EFF leader Julius Malema and the EFF are appealing judge Elias Matojane’s ruling that the party has to pay the former finance minister R500‚000 for defamatory and false statements.
Image: ESA ALEXANDER

“A recusal is an irrevocable withdrawal from proceedings terminating the person’s continued participation therein. This is to avoid the perception of bias.”

This is what the EFF‚ its leader Julius Malema and spokesperson Mbuyiseni Ndlozi contended in court documents filed at the Johannesburg high court on Friday.

They argued that if other candidates knew about Manuel’s recusal‚ they may have “wished to seek Manuel’s recusal in order to protect their rights” in their own job interviews.

They are appealing judge Elias Matojane’s ruling handed down on Thursday that the party has to pay the former finance minister R500‚000 for defamatory and false statements the party made.

EFF must pay R109,000 to prevent assets being seized: AfriForum

AfriForum has given the EFF and its leader Julius Malema a week to pay the civil rights group R109,000 or face legal action to have the party’s ...
News
3 years ago

Matojane also ordered the EFF to remove a statement about Manuel from all of its media platforms about the interview process for Kieswetter.

Manuel went to court after the EFF in a statement on March 27 accused him of nepotism and corruption in influencing the appointment of Kieswetter. Manuel chaired the selection panel which interviewed shortlisted candidates for the job.

But Manuel recused himself when Kieswetter was interviewed because the candidate was Sars deputy commissioner at the time Manuel was finance minister.

Manuel said earlier the statement was defamatory as it implied he were corrupt‚ nepotistic and conducted an unlawful appointment process.

The EFF also defended their remarks as “political speech” and argued the “reasonable reader” would “be used to the kind of language used as being consistent with their colourful rhetorical style”.

“The position of the [EFF] was that the statement itself did not need to be supported by facts or explained away‚ as such‚ on account of its political nature.”

Ramaphosa has given country a mixed bag of cabinet ministers

While the president has made some good appointments, retaining the likes of Nzimande and Motshekga does not bode well for education
Opinion
3 years ago

Opportunistic EFF can smell blood with Gordhan on ropes

Is EFF opportunistic? If we take into cognisance that there is bad blood between Pravin Gordhan and Julius Malema then their move to back public ...
Opinion
3 years ago
Next Article