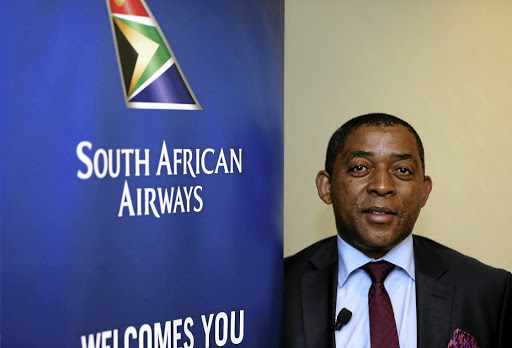 SAA group CEO Vuyani Jarana has resigned, becoming the second SOE chief to resign in as many weeks. Jarana said he was unable to turn around the national airline due to, among other things, inconsistency.
Image: REUTERS / Siphiwe Sibeko

SAA CEO Vuyani Jarana is bailing out from the national airliner amid frustrations which allegedly made it impossible for him to turn around the loss-making state entity.

In his resignation letter, dated May 29, Jarana wrote to board chair JB Magwaza saying a clause he had requested when he was appointed in November 2017 for SAA to remain under National Treasury until its turnaround was not adhered to.

"I requested that the following clauses be incorporated into my contract of employment: that SAA remains with National Treasury . regardless who the ministers of DPE [public enterprises] and NT [National Treasury] were.

"This was to ensure that there's consistency and I don't have to go through two state departments to obtain approval. I have since gone through four ministers since joining SAA."

Jarana is the second state-owned entity boss to quit in as many weeks. Eskom CEO Phakamani Hadebe also resigned over a week ago.

Public enterprises ministry spokesperson Adrian Lackay declined to comment on Jarana's request that SAA should fall under Treasury and not public enterprises, referring Sowetan to the board, which he said was meeting yesterday. "I would not want to comment. He [Jarana] accounts to the board, the board is meeting and will release a statement on this matter," Lackay said.

Jarana has also listed uncertainty over government funding, delays in getting approvals for appointing executives, and blurred lines of accountability as some of the challenges he faced since his appointment.

SAA, which hasn't made a profit since 2011 and has relied on state funding to stay afloat, was only expected to start making a profit in 2021 as per projections of its turnaround strategy.

"One of the areas of concern is speed of decision making. It is impossible to succeed in the turnaround with the current level of bureaucracy we have to go through to implement the strategy," Jarana wrote in his resignation letter.

"Currently SAA must obtain approval from DPE and National Treasury to implement some of the key decisions . it takes away the agility required for an entity in financial distress, an ICU case."

Finance minister Tito Mboweni, who told investors in New York late last year that SAA was unlikely to be salvaged, yesterday said: "It would be inappropriate for me to comment. The line ministry is public enterprises."

Jarana also stated that even though the government had injected R5bn in the 2018/2019 financial year into SAA, a "big chunk of that was used to fund creditors up to end of March 2018".

"We have not been able to obtain any further funding commitment from government, making it very difficult to focus on the execution of the strategy," he wrote.

The national airliner announced early this year that it was evolving its operations model as it would organise itself into domestic, regional and international business units.

This would see each unit with its own management in an effort to make the airline more agile.

When approached for comment about Jarana's resignation yesterday, SAA spokesperson Tlali Tlali said: "The board will release a statement on this."

Jarana said in his letter that he was "prepared" to serve his three-month notice period and depart on August 31.

The South African Airways (SAA) board has accepted the resignation of Vuyani Jarana, group chief executive officer.
News
2 years ago

SAA unbundled: Everything you need to know

South African Airways is one of several troubled state-owned entities that are undergoing restructuring.
Business
2 years ago
Next Article