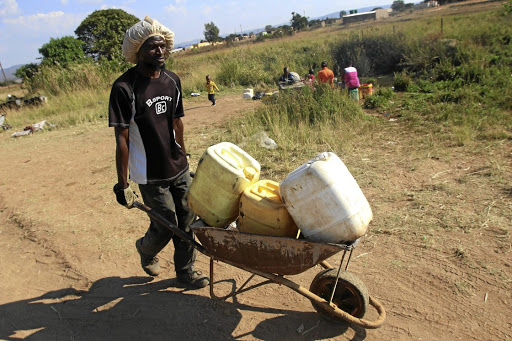 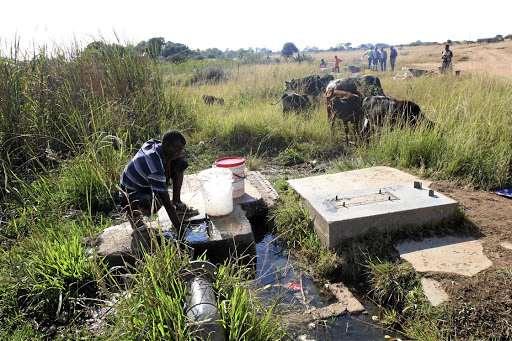 A severe water crisis has hit Sekhukhune, leading to the district municipality seeking to declare a disaster situation.

So bad is the crisis the Sekhukhune district municipality in Limpopo has taken desperate measures to engage both the provincial and national governments to declare the Moutse East and West as disaster areas.

The areas have received less rainfall in the past four years and dams are at an all-time low. To add to the desperate situation, the recently installed water supply infrastructure has been left unattended, resulting in widespread
leakages.

The Rhenosterkop Dam, in the Mkhombo Nature Reserve, is nearly empty. The Waalkraal pump station, which was built to supply the villagers with clean water, is also losing a lot of water as a result of leaking pipes.

"As a short-term measure, we are using water tankers to supply water to essential service institutions. But the situation is bad and something needs to be done as a matter of urgency," Ramaila said.

Residents of a Limpopo village have been forced to erect makeshift toilets as a backup after toilets supplied by the municipality became full. The ...
News
5 years ago

The pump station in Moteti village is dysfunctional, leading to residents of Hlalampya, Mandela, Motsemodala, Matshelapata and Slovo Park villages struggling for water. Through desperation, some force their way onto the property of a Hlalampya family to access water from a borehole.

Homeowner Anna Makuwa said when there was no one around at home, the family would return to find the gate damaged as residents force their way in to get water.

Makuwa, 69, said residents come to her home any time of the day asking for water, some in cars, in donkey carts and others with wheelbarrows.

"I so wish help could come for fellow villagers to get access to water. That way it would reduce the burden on my family as we sometimes spend sleepless nights trying to assist the residents to get water," said Makuwa.

"We have no choice but to use the same water with animals for drinking, cooking, bathing and other household chores," Thibi said.

According to Ramaila, the aim of the process to call for the declaration of the Moutse area as a water disaster area is to draw "much-needed" intervention in terms of financial and technical support.

Sputnik Ratau, spokesperson for the department of water and sanitation, said they would wait for the district to state their case. "The municipality would have to justify why it wants that area to be declared a water disaster area, and the disaster management centre will make a determination to that effect," Ratau said.

Limpopo's Jane Furse Hospital‚ which was forced to shut its doors after being damaged by heavy flooding in December‚ was reopened on Monday by health ...
News
2 years ago

Philadelphia Hospital in Limpopo has been forced to schedule operations according to the availability of water.

Authorities at the hospital have a task of switching off pipes pumping water to the institution's reservoir at night.This is done to allow the reservoir to fill up, authorities said.

The shortage of water in the Sekhukhune district municipality (SDM) in Limpopo is impacting negatively on the operations at the hospital and five clinics in the Moutse area.The outlet pipes are switched off at 6pm on a daily basis and switched on the following morning, to ensure that there would be enough water for the institution to operate smoothly.

The SDM is also trying to provide water tankers to the hospital, though it is not enough to allow for the smooth running of the institution.

"We do get periodical supply of water tankers to the hospital but the water is not enough," said spokesperson for the Limpopo department of health Neil Shikwambana.

"This impacts negatively on our operations in the theatre, which are required to be done daily depending on the availability of patients needing such [operations]." He said in case of emergencies, they would not switch off the pump machines to ensure continuous pumping of water into the reservoir.

"When there is a shortage of water we would communicate with SDM to provide such," he said, adding that there had not been any patient who had lost their lives due to the shortage of water.

"There had also not been an outbreak of any disease as a result of the shortage of water at the hospital," he said.

SDM mayor Stanley Ramaila said though they were trying to provide water to the hospitals in the area, they were experiencing a problem due to the serious shortage of water in the district.

"We are aware of the problem of water provision in hospitals in the area but we are trying our best with the meagre resources we have at our disposal," said Ramaila."

We also provide water tankers to the hospitals to ensure that operations do not get impacted negatively.

"We are aware of the inconvenience caused by shortage of water and we are not folding our arms. We want the problem to be resolved," he said.