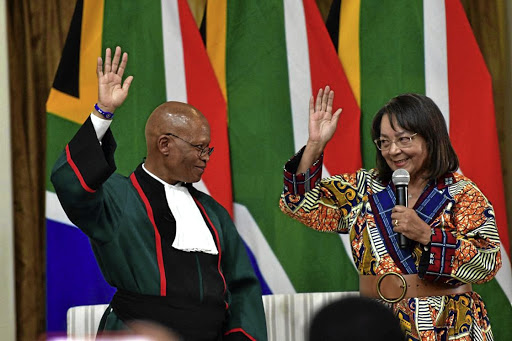 Chief Justice Mogoeng Mogoeng swears in Patricia de Lille as minister of public works and infrastructure. The Good party leader is the only minister from opposition benches.
Image: GCIS

Cosatu has welcomed the appointment of Good party leader Patricia de Lille into the ANC-led government.

De Lille made a surprise entry into President Cyril Ramaphosa's cabinet on Wednesday, where she is the the only minister who
comes from the opposition benches. She will head the ministry of public works and infrastructure.

Losi said the federation was not opposed to her appointment as her track record has proven that she knows how to handle administrative affairs, having been the mayor of Cape Town.

The new cabinet was a mix of faces and a few surprises.
News
3 years ago

"We hope she will do a sterling job, so she must be given the necessary support like all other ministers and deputy ministers. During her recent saga in the DA, part of the issues she was dealing with was spatial planning in ensuring that people are accessing areas that were predominantly exclusive to the African people," said Losi.

Yesterday, De Lille took her oath of office at the Sefako Makgatho presidential guesthouse in Tshwane, along with 27 other ministers and 34 deputy ministers.

De Lille's appointment is a boost for her credibility and the ANC, which has over the past two terms failed to reclaim back the Western Cape, which is led by the DA.

After months of court battles and public spats with the DA's leadership, De Lille resigned from the DA to form the Good party.

While it's not the first time that the ANC-led government has appointed a member from the opposition benches, Cosatu denounced those that have objected to De Lille's appointment.

"She is accountable to the president and has a responsibility to implement the policies of the ANC in government and that is the standard by which she must be measured upon and not where she's coming from, but what she's capable of doing," Losi said.

GOOD leader Patricia de Lille said on Thursday, with a chuckle, that there would be no blue-light brigades whisking her around as the country's new ...
News
3 years ago

Half of Ramaphosa's ministers are women: this is the power squad

President Cyril Ramaphosa's cabinet is 50/50 men and women.
News
3 years ago
Next Article