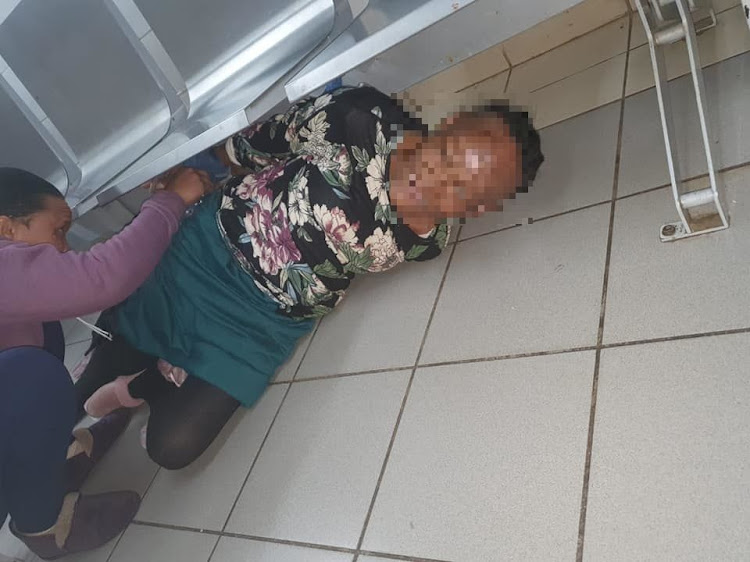 An elderly woman identified as Martha Marais who was tied to a bench allegedly by nurses a Mamelodi Hospiltal in Pretoria.
Image: Facebook/Virgin Keepler

A-76-year-old woman was tied to a hospital chair and left to lie on the cold floor, allegedly by nurses at the Mamelodi Hospital in Tshwane.

Images and video clips of the elderly woman lying on the floor went viral on social media after a furious relative, who identified her as Martha Marais, shared them on social media.

In one the video clips a woman claiming to be Marais’s daughter can be seen kneeling next to the 76-year-old and screaming at staff.

“This is my mother, man. This is not a dog. Is it right for me to come and find my mother like this? Is this right? She is 76 years old and this is what you are doing to her,” the woman shouts.

Virginia Keppler, who is Marais’s niece, shared the images and expressed her shock through a Facebook post.

“Nursing staff at the Mamelodi Hospital tied her hands behind her back and to these chairs, forcing her to to lay on the cold floor since Tuesday night. Nursing staff ignored her, yet the staff at Eersterust clinic referred her because she needs urgent medical attention. Not even hardened murderers, rapists are treated like this,” Keppler wrote.

She called on the health department and police to take steps against hospital staff.

“This is disgraceful and then they wonder why we do not want to go to this 'killer' hospital. This must end right here. Disgraceful,” she said.

DA shadow MEC for health Jack Bloom said the images were horrific, adding that Marais was subjected to abuse. Bloom said he had reported the matter to the HOD at the Gauteng health department.

“I have sent this to professor Mac Lukhele, head of the Gauteng health department, for his immediate attention. Mamelodi Hospital is notorious for poor treatment of patients. I hope that the new health MEC, Bandile Masuku intervenes urgently to fix the deep-seated problems at this hospital,” Bloom said.

Spokesman at the provincial health department Lesemang Matuka said they would investigate the matter.

" Gauteng Department of  head office was not aware of this incident  until this morning, its matter that we will follow up with keen interest to ensure that it doesn't happen again in any of our public health facilities.

Our patients should be treated with dignity and respect at all times," Matuka said.

Clinical manager at the hospital Dr Mpho Thoabala said they were appalled by the incident.

"Restraining her in such a manner is both inhumane and insensitive. The hospital management is  investigating this matter and those involved will be taken to task.

In the meantime, we will offer councilling to the affected  parties, " Thoabala said.

The decomposed body of a man was discovered in the ceiling of a hospital in Durban on Friday.
News
2 years ago

The Limpopo primary school where 46 children had to be hospitalised on Tuesday after complaining of severe stomach cramps has denied that it was a ...
News
2 years ago
Next Article