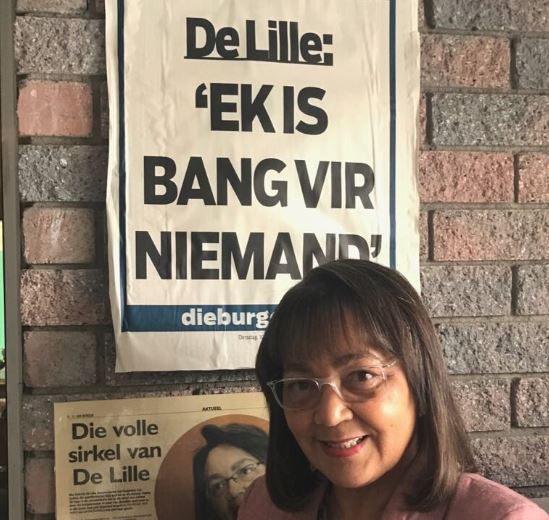 GOOD leader Patricia de Lille said on Thursday, with a chuckle, that there would be no blue-light brigades whisking her around as the country's new minister of public works and infrastructure.

"No, no. No blue lights. I'm staying away, far away from anything that's blue," she told Power FM.

It was the tail end of a conversation that touched on her estranged relationship with the DA, under which she served as mayor of Cape Town. That relationship ended in a very public "divorce" that saw her form a new political party, fight an election campaign and land a cabinet post.

Asked if she felt her appointment was merely a strategy by the ruling party to deal with the DA, De Lille said: "No man, I think we must forget about the DA. They've got enough problems amongst themselves in the different factions and they must sort it themselves. What we need in our country is to rise above our political differences and we need to serve when we are called upon to do so.

"I'm really not bothered about what the DA is saying or thinking".

De Lille said she would hit the ground "sprinting", not running, in her new job.

"She now serves in the same cabinet as the team there and we have to hold her accountable, the same as we would any other member."

De Lille said after her new position was announced, in a series of tweets: "I pledge to continue the struggle for dignity & fairness for all South Africans ….

I pledge to continue the struggle for dignity & fairness for all South Africans. I want to thank all my colleagues in the GOOD movement, and all who voted for GOOD, for their hard work and belief that change is possible, that the country we dreamed of 25 years ago is achievable.

"I will continue to lead GOOD, and to fight for a responsible, accountable and compassionate government. On President (Cyril) Ramaphosa's election to the presidency last week I pledged GOOD's constructive support for turning SA around.

"This support we will wholeheartedly give, but I will be joining President Ramaphosa's executive with open eyes and ears as a representative of good South Africans of integrity who love their country and demand better of their leaders."