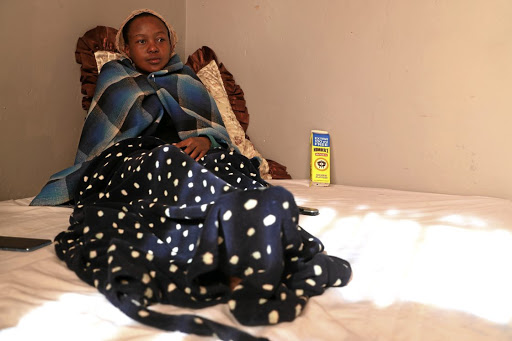 Lucia Ndala is still shattered after her three children were killed, allegedly by her boyfriend before he committed suicide by hanging himself in his bedroom on Tuesday. /Sandile Ndlovu

A young mother was inconsolable yesterday as she recalled the last words her three children said to her, shortly before her lover allegedly killed them and committed suicide.

The children - Thabang, 11, Amogelang, three, and one-year-old Lebogang - were found hanging in the lover Tebogo Mojutu's bedroom in Soshanguve, north of Pretoria, on Tuesday.

"Mama I love you," Lucia Ndala, 27, recalled Thabang, Amogelang and Lebogang saying on the phone that morning. She said Lebogang repeatedly called out for her on the phone.

Lebogang was the couple's only child. Ndala had Thabang and Amogelang from past relationships.

Mojutu, 28, also told her that he loved her. Shortly after ending the phone call, he allegedly hanged the children and himself in his bedroom.

This was after Mojutu had accused Ndala of cheating on him.

"If I could turn back the hands of time and change my life, I would delete the part where I met him. My children were my world and he knew it," Ndala said weeping.

"He took away everything that I lived for. It feels like a horror movie but it doesn't end. He killed my children in the most brutal manner."

A Mthatha taxi boss killed his three children at the weekend before turning the gun on himself‚ police said. The children were aged six‚ eight and ...
News
2 years ago

She said the problem started on Monday night when Mojutu came to her home.

He asked her to open the door but she refused because the couple had fought the previous day.

She said he had accused her of keeping a man in the house. She replied: "Yes," not thinking that it would lead to the murder of her children.

On Tuesday, as usual, he had fetched the children from Ndala's home and said he was taking them to the shops to "buy pizza".

"I called him several times and at one stage he said 'how would you feel if I killed myself and the children?'

"I told him that I would be hurt but I know that he will never kill my children because he loved them.

"He said he will kill the children because he does not want them to suffer when he is gone. He said he did not want to leave me with a burden. He said he wanted me to feel the pain that he felt when I told him that I did not love him anymore. I then walked to the police station and called the police," Ndala said.

But help came too late as Mojutu's brother found all four of them hanging.

"My brother never spoke about his problems. He tried to kill himself twice before, the latest incident in March when he took poison.

"We are devastated because we know that he loved these children," said Johannes.