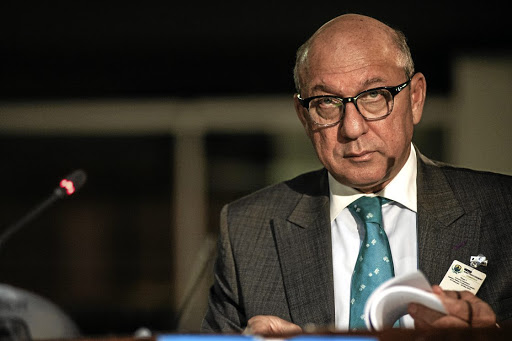 The EFF has been ordered to apologise to former Finance minister Trevor Manuel for defamation and peddling false information against him.

This is in connection with a March, 27 statement released by the EFF in which the political party accused Manuel of nepotism, corruption and conducting secret interviews in the selection process of the commissioner of the South African Revenue Services (Sars) which saw Edward Kieswetter being appointed as the revenue services boss.

The EFF claimed that Manuel had a close personal and business relationship with Kieswetter.

Justice Elias Matojane ruled that the EFF’s remarks were defamatory, false and ordered the party to not only remove the statement, published on Twitter, but to also offer an unconditional apology within 24 hours.

The EFF, its spokesperson Mbuyiseni Ndlozi and its president Julius Malema have also been ordered to jointly pay Manuel R500,000 in damages. They must also pay his legal fees on an “attorney and client scale”.

Manuel plans to donate the R500 000 to a charitable organisation.

Former finance minister Trevor Manuel has taken legal action against the EFF and its spokesperson, Mbuyiseni Ndlozi, for accusing him of influencing ...
News
3 years ago

The court found that the fact that Manuel and Kieswetter had an employment association “many years ago” does not prove bias on the part of Manuel and that his disclosure of this as well as recusal shows he avoided conflict of interest.

The court also found that the EFF’s assertion that the selection process was secretive was not true.

“The process was open and transparent, even if the interviews themselves were not public,” read the judgment.

The court said it believed that the EFF, its spokesperson Mbuyiseni Ndlozi and its president Julius Malema, had a clear intention of hurting Manuel’s public image after refusing to retract their statement and therefore believes the amount requested should be paid.

“The motive and conduct of the respondents are relevant. They stubbornly refuse to retract, apologise or remove the impugned statement from their social media platforms, when it is evident that they should do so.

“These factors collectively establish the existence of actual malice and a desire to hurt Mr Manuel in his person and professionally, through the widespread dissemination of the defamatory statement. Such conduct warrants a punitive costs order,” the judgment read.

EFF has indicated its plans to appeal the judgment "related to our correct observation, which Manuel does not dispute, that he was conflicted in interviewing Edward Kieswetter because they are friends".

The EFF uses language which is “open to criticism as being heavy-handed, inelegant, unfair, overly critical or even insulting”.
News
3 years ago

The EFF could not use defences usually relied on in defamation cases because it had lied.
News
3 years ago

New SA Revenue Service (Sars) boss Edward Kieswetter wants nothing but to focus on his job‚ as the EFF plans to do everything in its power to reverse ...
News
3 years ago
Next Article